Farewell For Now to The Highball 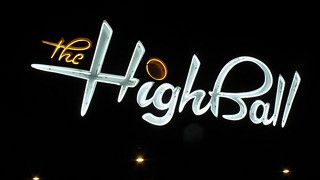 Farewell (for now) to the Highball (Photo by Richard Whittaker)

So The Highball has closed and shut up I just have something in my eye.

I didn't live in Austin when the Liberty Lunch closed, and frankly you can hear one story too many about the Armadillo World Headquarters. Was I chagrined when Emo's shut up shop? Yes, and I, like many gig-goers of my era and ilk, will always remember with a misty eye that pole in the middle of the stage and that angled step alongside of the moshpit, and that gloriously depraved Flintstones mural in the front room. And now the Highball, the classy, sassy cocktail lounge at the Alamo Plaza, is joining them in the history books, as the complex closes to become condos.

So I'm not going to mourn the loss of the Highball for decades. But when it closed its doors on Nov. 17, it was a period mark on a glorious sentence in Austin's cultural chronicle.

Not to play the one-upmanship card here, but I was a fan and a customer of the Highball before you. Back in 2009, there was a soft opening during Fantastic Fest – in fact, it will be hard to think about Fantastic Fest without the Highball. I was in there, scrounging coffee and water and wireless and thinking to myself, you know, this is pretty damn sweet. The lucky octagonal mirrors, the bowling lanes, the retro swinging Vegas vibe of the place. And I remember thinking, wow, I'm glad I'm on a straight bus route from my apartment, because the parking is terrible. So let's not eulogize everything.

Sure, it became the jumping hot spot on South Lamar, but it was also a special place for film fans and pros and journos. It was kind of a genius idea from Alamo Drafthouse head honcho Tim League, to create a neighborhood bar where visiting film makers and actors could hang out after special screenings. The karaoke rooms doubled as interview suites, and that's what I'll really remember the Highball for. Hanging with the cast of Fright Night as they riffed like Huey, Dewey and Louie. Getting caught in the laughing maelstrom of the American Mary cast. Talking experimental theater with Tom Six and Laurence R. Harvey when they were supposed to be promoting Human Centipede 2.

If the Highball was one thing, it was relaxed. There was no red carpet velvet rope VIP area. There's probably a thousand cinema nerds who have a story about watching Winona Ryder bowl, or chatting over cocktails with the Wachowski siblings. The stage-invading karaoke chaos of The RZA and Elijah Wood ripping up the Black Eyed Peas is now festival legend.

But if it holds a special place in my heart, it will be for being the bar where my favorite woman in the world and I finally realized how much we liked each other. Thanks to the Highball, and its excellent Irish Carbombs.

Oh, did I say it was a period mark on some Austin history? Let's call it a semi-colon. With the Alamo South Lamar scheduled to close on Jan. 3, the renovation of Lamar Plaza will begin properly in the New Year. When it re-opens, there will be a new Highball, attached to the Drafthouse. Sadly, the bowling lanes will go (the price of keeping a Highball is losing the rocks, I'm afraid.) Personally, I have little doubt that the new 'Ball will still roll, and there will be new Fantastic Fest memories and new screenings and new interviews and new hangovers and new hangouts. But the first drink at the new Highball will be raised in salute to the last drink at the old Highball.

Some other relocated Lamar Plaza businesses, and their new addresses: