DVD/VOD Watch: ‘The Invisible Made Visible’

Still kicking yourself for missing The Invisible Made Visible, May’s live production of radio show This American Life that was simulcast in sold-out theatres across the world? Kick no more: The two-hour show is now available for a $5 download or a $16 DVD. 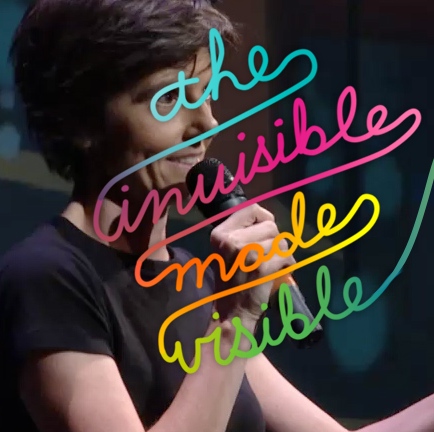 Comedian Tig Notaro
Some of the segments have since been broadcast over the air, but even if you’ve already heard comedian Tig Notaro’s standup routine about a series of bizarro bump-ins with Eighties pop balladeer Taylor Dayne, there’s really no underselling the sight of Notaro at work – she works the audience like a champ. TAL favorites pop in: an especially dyspeptic David Sedaris in clown face; Mike Birbiglia, directing and starring in a short film goof that’s pitched at Terry Gross super-fans; and house band OK GO, rocking hand bells and using the smartphone-packing audience for symphonic backup.

All facets of the show reflect the stretch to incorporate visual punch into a sound-bound medium, as when Ryan Knighton describes what it’s like for a blind man to build a map in his mind of an unfamiliar hotel room; he’s accompanied by an animated schematic of the room that slowly fills in as he describes getting the lay of the land.

But it’s the three dance sequences, stripped of words altogether, that mark the film’s high point. NYC dance troupe Monica Bill Barnes & Company supplies two dance numbers (host Ira Glass says he first got the idea for another live show while watching them perform), and the dancers are funny and lively and with faces expressive enough for vaudeville. 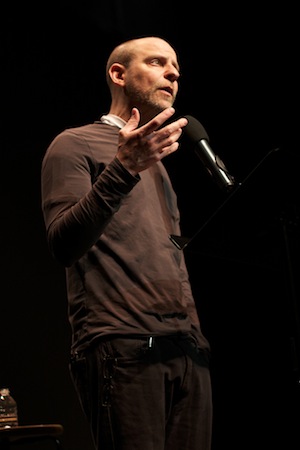 David Rakoff (photo by Adrianne Mathiowetz)
The other dance number is of an entirely different tempo, and it’s a heartbreaker: TAL regular David Rakoff interrupts a monologue – about his years living with cancer, his flail arm, and the possibilities now shut off to him, like dancing – to break into an elegant glide across the stage set to Nat King Cole’s “What’ll I Do?” The piece is about David Rakoff – one senses he’s dancing for himself, not an audience – but watching him, just three months shy of his death, doing a thing that seemed out of reach – well, you’d be forgiven for turning inward and wondering what’s holding you back from so much possibility.

ALSO OUT ON DVD:

Masterpiece Theatre junkies tearing their hair out for Downton Abbey’s season 3 premiere on Jan. 6 might find some sustenance in Call the Midwife: Season One (BBC Warner, $34.98): The BBC drama is about midwives in London’s downtrodden East End circa 1957.

And in lieu of thumb-twiddling till the March 31 season three debut of the deeply addictive fantasy saga Game of Thrones, it might be more productive to dive back into season one: Game of Thrones: The Complete First Season (Collector's Edition) (HBO Home Video, $99.97) is a Blu-ray/DVD/digital copy combo that includes a dragon egg paperweight and a Blu-ray bonus disc of Season 2’s premiere episode. A similar season 2 combo release comes out Feb. 19.