Fall's a Good Time To Fall for Preston Sturges

The Alamo Ritz kicks off a mini-retrospective tonight 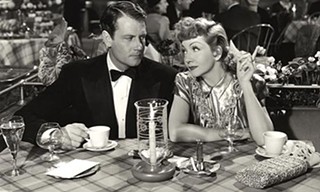 The Alamo Drafthouse Ritz launches a mini-retrospective of Preston Sturges comedies tonight (35mm prints!), and it’s the right time of the year for the series: For all of Sturges' acerbic kick and unsentimental ideas about society and so-called propriety, these are movies that make you feel so very warm and cozy inside.

Even before he landed in pictures, Sturges led a storied life. His childhood was peopled with eccentric millionaires, minor royals, and the world’s most famous avant-garde dancer, Isadora Duncan, who was his mother’s best friend. (According to Sturges, it was his mother who wrapped the fatal scarf around Duncan that would moments later snap her neck.) As an adult, he purportedly invented the first “kiss-proof” lipstick for his mother’s cosmetics company and then had great success as a playwright and lesser success – but terrific material to later mine – in a series of love affairs.

Included in the three-film run is The Palm Beach Story, one of his masterworks. (I'd put The Lady Eve neck in neck with it as his crowning achievement.) In 2011, I programmed a series for the Austin Film Society on the comedies of remarriage, of which The Palm Beach Story is a sparkling example. Here’s an excerpt from the program notes (the full text of which you can find at the AFS website, but consider yourself forewarned: they’re chock full of spoilers):

“If you were coming to Preston Sturges cold, with no foreknowledge of his more-or-less invention of the writer/director role as we now know it or of the astonishing – we’re talking jaw-dropping – run of pictures he made from 1940 to 1944, including THE GREAT McGINTY, THE LADY EVE, SULLIVAN’S TRAVELS, and THE MIRACLE OF MORGAN’S CREEK (I’ve left a few out, and they’re all titles most writer/directors would kill to list on their CV) or of his alchemic blend of cynicism and reluctant but real sentiment, then the first five minutes of THE PALM BEACH STORY are as good a place as any to start.

“Using a soundtrack that dices the ‘William Tell Overture’ with Mendelssohn’s wedding pomp into a giddy, dizzy hash, Sturges stages a wordless sequence at breakneck pace: There is a church awaiting impatiently a wedding ceremony; a bride (Claudette Colbert) shackled in a closet and kicking at the door; her look-alike shimmying into the bridal garb; a fainting maid; and a groom (Joel McCrea) scrabbling for a cab. Bride and groom do indeed make it to the church on time – they hoof it down the aisle like there’s fire licking at their heels – and Sturges punctuates the “I dos” with a heart framing their faces and a title card that reads: “And they all lived happily ever after...” The postscript that shoots a metaphorical arrow straight through said heart: “...Or did they?” And that’s just the first five minutes.

“Upon the film’s release in 1942, Manny Farber called Sturges ‘the most progressively experimental worker in Hollywood (aside from the cartoon-makers) since the early days.’ The cartoon-makers were good company: Though largely celebrated for his verbal derring-do, Sturges was a great visual wit, too, and under the seeming broad strokes of his slapstick were layers of satire and Production Code nose-thumbing.”

Sturges 1941 comedy Sullivan’s Travels, about a comedy director (Joel McCrea) wanting desperately to be taken seriously as a hard-drama guy, opens the series tonight. (The director is working on a very dour thing about economic depression called O Brother, Where Art Thou? – ring any bells?) 1944’s The Miracle of Morgan Creek screens next – and don’t be surprised if it leaves you dumbstruck, wondering how Sturges slipped the story past the censors. (In brief: It’s about a young, unmarried woman who spends a boozy night with soldiers and wakes up preggers. Yeowza.) The series concludes with The Palm Beach Story, a delirious comedy about a busted-up couple (McCrea again, this time paired with Claudette Colbert) and the chase that ensues when the wife heads to Florida to ensnare a new husband.

They’re all pretty amazing comedies, but don’t let dear old Preston hear the word thrown around: “The only amazing thing about my career in Hollywood is that I ever had one at all.”

All screenings take place at the Alamo Ritz, but recheck listings before arriving at the theatre; the Alamo is notorious for adjusting screen times.