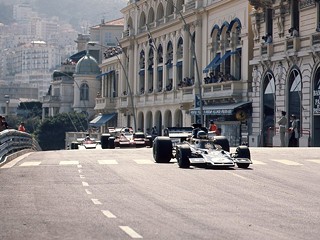 It's a little rare for a documentary to make a casting announcement, especially just hours before their world premieres. However, Formula One documentary 1 has announced that Michael Fassbender will be narrating their film, which debuts at the Paramount tonight.

Don't expect his dulcet Teutonic-Gaelic tones at the world premiere: Fassbender's narration has yet to be recorded, so tonight's red carpet gala will be the only screening with the previously recorded, temp voice-over. However, it will be ready when the finished film is released in 2013.

Fassbender's selection makes a lot of sense, since he's a big F1 fan, and in fact a self-described "Schumacher man" (hey, what F1 fan worth their salt isn't a little in awe of the seven-time world champion?.)

He'll have to fit it into Fassbender's already tight schedule, since he has two films in post-production, and three in pre-production, including his second eagerly-awaited time under Magneto's helmet inX-Men: Days of Future Past. Plus, as the joke goes, he's now eligible to be cut from the next Terrence Malick film, since he's been cast in his new, so-far untitled, Austin-shot feature with Ryan Gosling and Christian Bale.

SXSW and the Circuit of the Americas present the world premiere of 1 at the Paramount, 7:30pm, Nov. 15. See www.austintheatre.org for ticket info.