Austin Studios Breaking Out the Hammers

With voter approval, studio plans the next phase 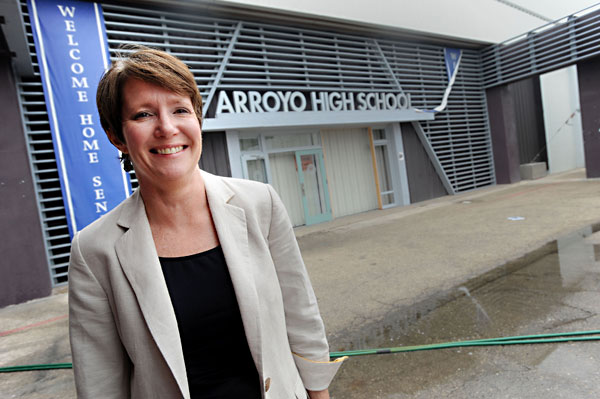 "First things first. We're having a big party to thank the community and introduce people to the building." Austin Studios executive director Rebecca Campbell preps for the big rebuild at Austin Studios. (Photo by John Anderson)

After a bond election in which seemingly sure-fire things like affordable housing went down, the folks at Austin Studios are breathing a sigh of relief that voters liked their request for cash to finish up their renovations.

The $13.4 million in Prop. 18 was split in two sections: $8 million for libraries, and $5.4 million for the studio. They need the cash as the last part of the big land switch that has taken place over the last few years.

The studios were built on the old Robert Mueller Municipal Airport in 2000, which explains why most of the sound stages look like old hangars. Over time, the studio has handed some of the property back to the city: In return, they were awaiting the handover of the neighboring National Guard Armory. Now they're leasing that land too, and the vision is to turn Austin Studios into a complete one-stop film and TV-making hub, from pre- to post-production.

The plan is to convert the existing armory into production space: The helicopter hanger will be the new Studio 7, while the rest of the building, post-rehab, will become 50,000 square feet of scaleable office space. Say a film maker wants to work on their project at Austin Studios: In the beginning, they may only need a small corner of one office, but, over time, they may need more space for pre-production, filming, post-production, and so on. The studio's plan is to let them grow and shrink their footprint as time, production and money demands.

So what's the cash for? In 2006, voters approved $5 million to renovate the existing buildings from the old Mueller airport. This new cash will allow them to do the same for the armory. It's well short of the $16 million that the studio originally calculated they needed to get everything done, but it definitely starts the process.

Just before she set off for a well-deserved post-election Thanksgiving break, Austin Film Society executive director Rebecca Campbell dropped us a line to explain exactly what will be happening next. First there will be what they're calling a "creative placemaking process." Using a $75,000 grant from the National Endowment for the Arts, they will design what she called "the public face of Austin Studios."

The plan will include:


An extended exhibition and visitor center
A new screening room
Educational space (one of the studio's big goals has been school and community outreach.) Those public spaces will be paid for from private funds, to be raised over time. However, by planning the production and public space at the same time, Campbell said, "We'll emerge from this process with a master plan that gives context for the use of the bond funds."

The planning stage should be done by next Summer, and the rough timeline will see tenants move in some time early in 2015. "But first things first," said Campbell. "We're having a big party to thank the community and introduce people to the building." So if you want to see the place where they shot Friday Night Lights, Stop Loss, Grindhouse, and Predators (or, if you're all about ABC Family, The Lying Game), you can attend the Make Watch Love Austin party on Dec. 8. The night will include an indie game arcade, hosted by Juegos Rancheros, plus a chance to play with new kit at Gear Alley and hang out in the SAG/AFTRA Actors' Corner. Admission is free to AFS members or $10 for non-members, but since membership starts at $50, and gets you into all kinds of events and screenings for free, it may be worth adding to your Christmas wish list anyway.