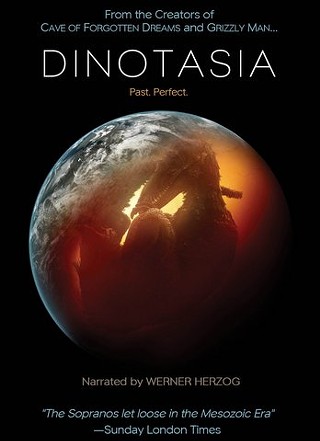 So Werner Herzog narrated an animated film about dinosaurs. No, wait, come back. It's real, and it's really rather good.

The Discovery Channel's Dinotasia is the latest link in the post-Walking with Dinosaurs evolutionary chain. It's pretty standard in many way: Dinosaurs breed, eat each other, and then the comet Nemesis smashes into the Earth and we enter the era of birds and bugs.

And then you have the director of Fitzcaraldo as the most unlikely voice of a child(ish)friendly(ish) tale since Samuel L. Jackson told us to go the f@(k to sleep.

You say "dinosaurs" and you're automatically surrounded by kids hoping for some serious T-Rex versus Hadrosaur action. So this means balancing the man that made the gruesome and haunting Grizzly Man with a film that kids are going to want to watch.

Actually, bizarre as it may sound, adding Herzog into the mix makes a lot of sense. His artistic sensibilities have always depended on a nature that is particularly bloody in tooth and claw. He's also increasingly become a documentarian, and is well-practiced with explaining the idiosyncratic actions of a primordial force of nature: After all, he worked with Klaus Kinski five times. Wakka wakka.

The real key is that, while he's the above-the-title talent, Herzog is used sparingly, almost solely as a mood-setter. "The savage indifference of nature does not hide its beauty," he intones in those soft Munich tones. Then the film launches into 'The Empty Nest,' a Loony Toons-esque exploration of first flight.

Yes, Loony Toons and Herzog. The pitch meeting must have been … interesting.

The film itself is a tribute to the tenacity of life. Directors Erik Nelson and David Krentz have retrieved some of their original vision for their Discovery Channel show Dinosaur Revolution. They wanted a history of the dinosaurs that was driven solely by the narrative: Discovery wanted a more conventional mix of animation and talking heads. The end result was like the feathered Troodon – neither bird nor lizard. Dinotasia is the same project disinterred. Think of it like Iguanadon: The first reconstructions of the fossils incorrectly identified it as a four-legged beast with a horn on its nose. It took brighter minds to see that it was a sometime-biped with hard thumbs.

Don't expect that level of paleontology here. Herzog doesn't name species or genus. Instead, he just sets the scene. It's a pure "show, don't tell" cinema, and the inevitable fact of dinosaur life is that there is a lot of eat-or-be-eaten going on. Easily frightened kids will probably freak out at some of the more gruesome moments: Fetus-filled eggs get splattered, necks are snapped, and arms are severed and consumed. Then again, Herzog would probably argue that those are exactly the kids that should see this. Toughen them up a bit for a universe full of arbitrary disaster.

The use of CGI may make this more photo-realistic, but the subject matter is probably no tougher than the Rites of Spring passage in Fantasia. The homage to Disney's classic anthology goes beyond just the name: Dinotasia is effectively a series of gorgeous skits – sometimes bone-crunchingly brutal, but often hilarious and surprisingly tender. This is an era when killers with the most unquenchable bloodlust also have a soft, rearing side. Conversely, the most obvious mobile meals have a wicked swing in their tail.

It should be an awkward juxtaposition: Mittel European existentialism, graphic Jurassic fight sequences, and broad humor. Surprisingly, the weakest component is the CG animation. It works well enough when the dinosaurs are set against real footage, but the handful of full CG passages are less realistic that Gertie. And, if we're looking at faults, then the disc is surprisingly light. The film itself is only 83 minutes, and the extras only stretch to an extended scene, an out-take and some animatics.

But for all that, it's surprisingly charming. If it was just goofy, then it wouldn't work, especially with some of the sub-SyFy effects works (the opening fight sequence on the lava fields of the Permian era is downright inexcusable.) But the beasts here have plausible emotional depth: They are vengeful, fearful, hopeful, petty, cranky, surprised, confused, inquisitive – all the things that Herzog would probably say it takes to be alive. Even in the ashes of a world after the Nemesis comet hits, that cycle of birth, death and rebirth that has always fascinated him is there. "Death will usher in life" is both his final warning and his blast of optimism.

RVBX: Ten Years of Red vs. Blue: Ready for 14 discs of the locally-produced Machinima classic? Rooster Teeth releases the entire 10 season run, just in time for the release of Halo IV($139.95 on DVD, or $179.95 on Blu-ray. If that seems like a lot, they're also releasing season 10, the second half of the Project Freelancer arc, on DVD and Blu-ray today via the Rooster Teeth store.

The Amazing Spider-Man: Remember, kids, if you buy this latest rehashing of the Marvel franchise, Sony will keep making more Spidey films, the rights will never revert to Disney, and he'll never be in an Avengers flick. Your choice. That said, Andrew Garfield is a much better Spidey than Tobey Maguire ever was. Don't debate me on this. Read our review here

They Live! Collector's Edition: Rowdy Roddy Piper! Mind control! Aliens! John Carpenter! Yes, the film that Branded ripped off is back for another round at the special edition trough.