Counselor Troi on picking fights and scaring the boys 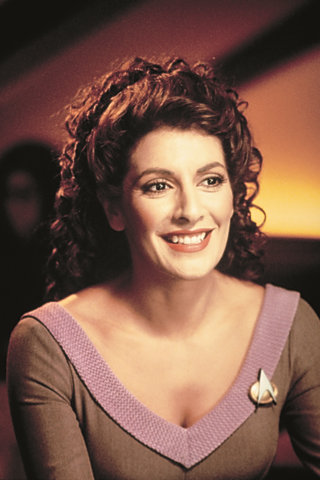 "On day one of filming, I thought we were going to get fired because we were laughing so much. We laughed for seven years nonstop of that set." Marina Sirtis on 'Star Trek: The Next Generation,' appearing this weekend at Wizard World Austin Comic-Con

There's a law: Wherever two Brits are in conversation, they shall either talk about the weather or soccer. When Marina Sirtis heard my North of England accent, the first words out her mouth were, with a piteous tone, "You don't even have a football team in Macclesfield. They're not in the league, are they? I think they're in the Northern Conference."

As Deanna Troi, one of the original crew of Star Trek: The Next Generation, she'll be at this weekend's Wizard World Austin Comic-Con for the 25th anniversary cast reunion. For fans, it's a rare opportunity to hear tales from the bridge. For Sirtis, it's a chance to catch up with her old friends in the cast. "We love spending the weekend with each other," she said. "We love being on our own, out of town, away from our significant others, and just us. We spend the whole weekend together. We go out to dinner together, we catch up, we just enjoy each other so much."

Luckily, it happens when her beloved Tottenham Hotspur isn't playing. Otherwise she would be glued to the TV, watching the match. "My husband's a football widow," she said. "He's always saying, 'I'm married to a dude,' because I watch every premiership game on a Saturday and all the European games in the week."

A full-blown Cockney ("Born within the sound of the Bow Bells, and I'm very proud," she said), even after 25 years in the US she's never lost her East End accent, even if a few Americanisms have seeped in. "I do say buddah and beddah and waatah and kawfee," she said. "When I was doing the show, because I was doing American all day, it kind of seeped into my own accent. But now I've stopped being Deanna Troi, it's come back with avengeance."

By 'the show' she means Star Trek: The Next Generation. Along with Patrick Stewart as Captain Jean-Luc Picard, she was one of two Brits on the original cast: Unlike Stewart, she wasn't allowed to keep her accent to play the part. However, in exchange she got to be part of something iconic – and to make some lifelong friends. She said, "We're all still a group, and I'm not sure whether Gene [Rodenberry, series creator] intended that or it was just some happy fluke of nature. Everyone had a blast on that show, except for some of the directors that couldn't handle the rowdiness."

25 years on, and Star Trek isn't just part of her resume: It's part of her life. That's mostly come from being part of a cadre of actors whose names are always synonymous. It's not just the seven seasons and four motion pictures. It's not that half the crew – including Sirtis – provided voices for Disney's Gargoyles animated series. "We're still best friends," she said, and it was instantaneous. "On day one of filming, I thought we were going to get fired because we were laughing so much. We laughed for seven years nonstop of that set." That didn't happen on all the Star Trek spinoffs. "I know some of the Voyager guys get together now and then, and I'm sure that happens with all the casts. I don't think any of the DS9 people keep in touch with one another, I have to be honest. But on TNG, we all got along."

Gargoyles became another home away from home for the cast. She and her TNG love interest Jonathan Frakes were series regulars, but the guest list reads like a who's who of Trek faves. For Sirtis, the part she played there was much more like her than Troi ever was. She originally read for the part of heroic detective Elisa Maza, but the creators asked her to come back the next day to read for the villainous Demona. "They said I was so evil that I kind of nailed it," she said. "I took that as a compliment, and not a comment on my personality."

Where Troi was all empathy and good will, Sirtis is happy to let her furious side out. "All the boys are scared of me," she said. "They're like, 'Don't make her angry. For god's sake, don't make her angry.' Michael Dorn says I'm just this walking anger molecule, waiting to explode."

The main cause for her annoyance? Politics. "How can you live in Texas with all those bloody Republicans?" she asked me. "I'd be screaming at everyone all the time." The previous weekend, she started an argument at a convention in Burbank with a man in a Romney/Ryan t-shirt. "All I said to him was, 'Really? In Los Angeles, that's the t-shirt you're wearing?' Which I thought was quite funny. He didn't." 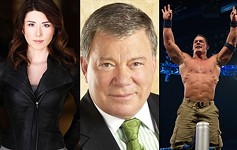