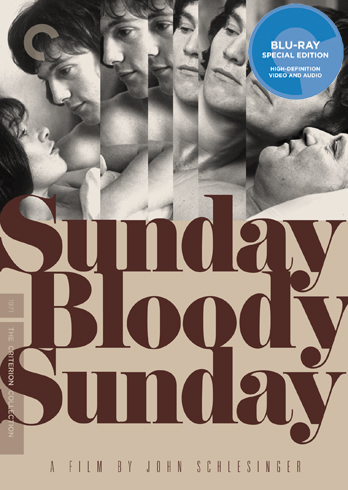 Landmark in its time for its casual depiction of a gay relationship, Sunday Bloody Sunday stars Peter Finch as Daniel Hirsh, a general practitioner who is out with his friends but still closeted with his patients and sprawling Jewish family. Daniel loves Bob (Murray Head), a significantly younger, boho installation artist, but he has to share him with Alex (Glenda Jackson), a recent divorcée. The triangle reflects the era: affluence and conservatism tangles with counterculture free love tangles with women’s lib.

Bob flits between the two, doling his love out equally between them, and everyone gets that this is the arrangement. But quickly we come to understand that these are Bob’s rules; Alex and Daniel have only agreed to them because half of Bob is preferable to no Bob at all. Or is it?

In an interview included on the Criterion Collection’s new Blu-ray release ($39.95), Head articulates the same thought that struck this viewer, at least: What the hell does everybody see in Bob? Impetuous, unpinnable, and limply inhabited by Head (he looks like Paul Dano with better cheekbones but none of the prickly intellect), Bob works better as an idea than as a flesh-and-blood motivator of so much ardor. (The character, and the love triangle, were based closely on a failed relationship of Schlesinger’s and interpreted by critic-turned-screenwriter Penelope Gilliatt.)

Still, the shaggy-haired vacuum at the center of the piece hardly matters: This isn’t Bob’s story. What matters here is the all-or-nothing(-or-maybe-option-c?) inner wrangling of gentle Daniel and reactive Alex. Though the tactics sometimes grate – superimpositions, a dated-feeling over-the-shoulder slow zoom, and awkward memory/fantasy sequences – it’s significant that Alex and Daniel both have gruesome fantasies (of a dead child and dead Bob, respectively). It makes sense: They’re the ones insecure in their relationship. Bob holds all the cards, and therefore has nothing to lose. (A crueler interpretation would be that Bob is the one with no inner space.) Irregardless, the film’s frequent use of Così Fan Tutti’s goodbye trio “Soave sia il vento” – "May the wind be gentle" – is telling. It’s both a portent of Bob’s eventual abandonment, and a signal that Sunday Bloody Sunday is the song of those left behind, not the one doing the leaving. 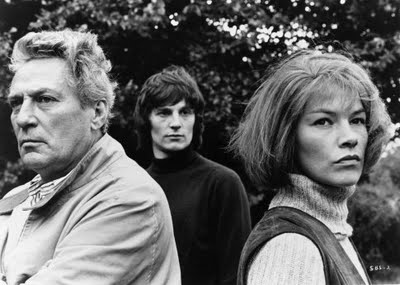 Finch and Jackson play terrific foils. Their characters don’t share the screen until late in the film, but even apart, they’re always playing against each other. Jackson is not an ingratiator: Her Alex is angry – so angry – and the actress plays her with a half-snarl. Another woman in love (a year after her starring role in Ken Russell’s Women in Love), but self-aware enough to know her own limits: A piecemeal affair is not for her.

Finch was awarded the Oscar (posthumously) for his mad-as-hell Howard Beale in Network, and should have won for Daniel’s monumental minimalism, too. (He lost to Gene Hackman in The French Connection.) His final monologue is a quiet devastation, even if the direct camera address feels piped in from a French New Waver. (The unbroken tracking shot was apparently a bitch to choreograph, with a bulky camera and breakaway walls.) If Daniel is Schlesinger’s stand-in (and given the autobiographical mirroring, that seems a safe conclusion), then one imagines it’s Daniel’s stance that “half a loaf” is better than none at all is the one the director ascribed to. The happy coda, then, is that shortly before shooting, Schlesinger met his life partner, photographer Michael Childers (who pops up on the extras), and the question of if half-a-loaf could make a meal was taken off the table for good.

Fear and Desire (Kino Classics, DVD $29.95, Blu-ray $39.95): Stanley Kubrick’s 1953 feature film debut, and his first of three war pictures, Fear and Desire costars future filmmaker Paul Mazursky as a mentally unhinged soldier. Included on the release is the remastered promotional documentary “The Seafarers,” which Kubrick made before his second feature, Killer’s Kiss.