A lot less chainsaw in this new Texas massacre 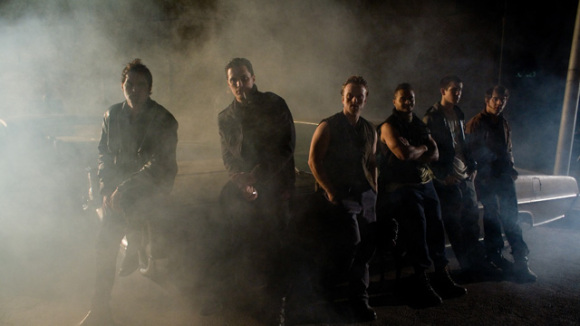 When Kim Henkel wrote The Texas Chain Saw Massacre, the Texas film industry was ecstatic but the state tourism authorities were furious. Doubt the San Antonio tourism board will be too happy at his latest, Boneboys, either.

There's not so much of rural Texas left any more. Not the kind that you can hide a family of cannibalistic inbred hillbilies, anyway. So Henkel's new generation of flesh devourers are urban dogs on the loose, a cadre of leather-clad gangsters with a lock on a niche market: Long pig of the freshest kind. The eponymous Boneboys are a pack of scarcely-restrained Central Texas scumbags, kidnapping young women for their nefarious intentions. They run Ali Faulkner and her friends off the road, and set about their dinner plans.

Co-directors Duane Graves and Justin Meeks did something fresh and different with the Sasquatch for Wild Man of the Navidad: It's a lot tougher to find any way to innovate in the realm of the slasher. That said, you put Henkel's name on the project and everyone's bound to look for comparisons to the adventures of the Sawyer family.

They're there, and many of them are pretty superficial. Look for quick cameos from Ed Neil (TCM's hitch hiker with a taste for head cheese), Marilyn Burns, and even Ed Guinn, best (well, pretty much only known) as the truck driver who's a dead aim with a tire iron.

There's no shortage of structural similarities either: Faulkner (soon to be seen in locally shot Bad Kids go to Hell), like Burns, quickly becomes the last teen standing in a realm of insanity. Yet she's a lot more creative than the screaming, fleeing survivor of Henkel's career-defining shocker. So, in many ways, do the bone boys surpass the amoral excesses of the original clan of killers. Graves and Meeks work from Jonathan Swift's sickly social satire A Modest Proposal for Preventing the Children of Poor People From Being a Burden on Their Parents or Country, and for Making Them Beneficial to the Publick (or A Modest Proposal, if you don't have the time). However, they pass it through a modern lens, and there's a big debt to House of a Thousand Corpses (not least when Tom Byrne starts channeling his inner Bill Moseley.) No-one is going to confuse this with the other recent Mexified cannibal outing, 2010's Fantastic Fest chiller Somos Lo Que Hay (We Are what We Are.) That was a slow-rolling gnaw on the bone: In its third act, Boneboys takes a trip up the gory garden path to where the Firefly family lives, complete with one gruesome effect that'll stick in your throat for a couple of days.

You may get a real feeling that Henkel doesn't like Texas. Set amidst the collapsing warehouses of San Antonio (although eagle-eyed Austinites and Highball regulars may recognize a few pickup shots) Boneboys is a scattershot hate note to the state's psychopaths, spoiled brats and indifferent cops.

Is it derivative of Henkel's earlier work? Yes, but in a good way, in a way that keeps everything that was fresh and disturbing. He may be ripping the soil off his old cinematic grave, but with Graves and Meeks he definitely gets that rotting flesh jumping.

AFF2012: It's in the Blood
Lance Henriksen keens and roils with redneck angst on VOD today

AFF2012: 'A.K.A. Doc Pomus'
You already know the songs, now meet the songwriter