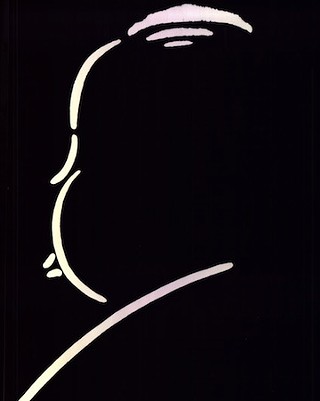 It was the strangest thing. I'd never noticed it before. For two years I sat at the Chronicle front desk, answering phones in the morning, between proofreading shifts. And I'd never, ever noticed it.

My seat faced the front door, next to which there was a floor-to-ceiling panel of glass. For the greater part of my front desk duration, the panel stayed covered in 8.5x11 flyers and 11 x 17 posters promoting local shows and events. Each week, Fritz from Motorblade Postering Service and I would have a lovely visit chatting and gossiping as he changed out the week's poster art.

Then one day, Louis proclaimed that we were to no longer use the panel as a bulletin board. No more flyers. From that day forward, the glass was to be clear. I was bummed at both the loss of weekly visits with Fritz, but more so, the for the loss of direct connections to so many of the week's events. The stream of new light, however, was welcome.

As I gazed into that new light, it hit me. Since the window had stayed covered for years, I'd never before seen the crack in the glass or the pattern it made. It was eerily familiar. It was eerie and familiar. I could not believe my eyes.

The crack – or more precisely, the cracks – in the glass formed a bizarre iconic shape, and in light of this newspaper's obsessive devotion to film, a strangely significant one. When I began to share my observation, work colleagues and visitors alike would, for the most part, cluck in agreement, "Wow! You're right!" Even when I showed Louis, a strange thing happened. He did not scoff or call me crazy. He, too, saw it. Or at least he said he did.

In the glass, two semicircular cracks formed the exact, distinct shape that had become known as the iconic profile silhouette from the Alfred Hitchcock Presents TV show. It was Alfred Hitchcock! One crack formed that loping, phrenologist's-dream forehead and the other, his patented drooping bulldog jowl. A smattering of minor cracks made details like nose and hair and shoulders pop to a tee. For years Hitch watched over us – our patron ghost saint of the macabre and slightly disturbed.

One of my saddest days at the paper was the day I saw a repair dude out to switch out the glass. Apparently it was dangerous. No duh. So was Hitch. We've never been the same.

Editor’s Note: In anticipation of tonight's premiere of HBO Film The Girl (see review here), about Alfred Hitchcock’s fraught relationship with leading lady Tippi Hedren, all week the Chronicle staff has been writing about their own relationships – sometimes tender, sometimes tortured – with the master of suspense.

Tuesday: Richard Whittaker on The 39 Steps.

Wednesday: Margaret Moser on The Birds and Rebecca.

Friday: Marjorie Baumgarten on The Trouble With Harry. 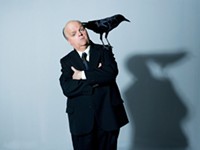