What to Expect From Game On Austin

A clickable guide to the participating studios and their games 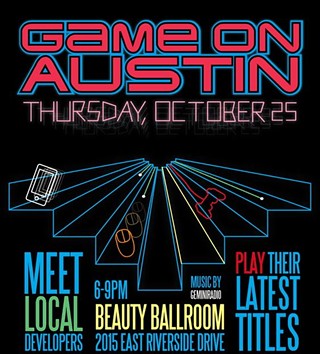 Contemplating going to the Game On Austin event sponsored by SXSW Gaming and The Austin Chronicle, but need a bit more convincing? Well here’s your guide to the participating studios and what they'll be showing with enough handy links to keep your mouse busy. Did we mention the event is free? How much more convincing do you need?

For those of you wondering what the event is all about the Game On Austin page is a good place to start. Some bullet points of that page include free pizza from Austin Pizza, door prizes, eye-catching projections from the Austin Museum of Digital Art, a retro gaming lounge courtesy of Game Over Videogames, and tunes provided by GeminiRadio. All that for just showing up.

If you’re there for more than just a free slice, decent beer deals (for those over 21), and eye and ear candy, you might want to check out the local game developers and their creations just waiting to impress you.

Arkane Studios, hands down the biggest name at the show, showcase their recently released and critically acclaimed stealth game, Dishonored. This is the season when lots of big titles begin hitting store shelves, so a quiet and/or deadly stroll around the beautiful dystopia of Dunwall might be just what’s needed to prove to you that Dishonored is a must-have.

God of Blades creators, White Whale Games, bring their cyber sword fantasy to the Beauty Ballroom for you to try. I firmly expect the game to be downloaded to various people’s iPhones and iPads before they leave the party. If the one-player hacking and slashing isn’t brutal enough for you, there will also be the unreleased two-player mode appropriately called Slayers. Enter the Slayers tournament and perhaps walk away with the respect of your peers and a few prizes.

The game audio gurus at Gl33k bring their still unreleased rhythm game/music creator/remixer, Cosmic DJ, to try out and even host an interactive demo of the game that mixes your commands with the expertise of the pros.

For those looking for a more classic gaming experience, Multimorphic lug their pinball/video game hybrid to the Beauty Ballroom. What might look like an overly simple pinball machine turns out to have an interactive screen that tracks the physical ball as it bounces around. Perhaps this demo video might help clear things up. Try it now because you won’t be able to purchase one until late next year.

The trio that comprises Stoic have a combined resume that would make any big studios jealous, and they’re about to release the multiplayer combat portion of The Banner Saga for PCs, but you can get a few practice rounds in now and school your friends when the game is released to the unfortunate souls who didn’t take advantage of this preview.

Semi-Secret Software is gearing up to unleash the minimalist perfection of Hundreds to your phones and tablets. An early Flash version of the game is playable now, but know that the new version has added features to an already brilliant piece of puzzle design. Check out the game’s thoroughly cool website.

The two-man team at Deep Plaid Games have been working hard to polish their follow-up to the peaceful puzzler Connectrode. That follow-up is Uncanny Alchemist Battle 1934 and pits the era’s great thinkers against each other for turn-based supremacy. We’ve been promised some bubbling dry ice at their exhibition table, but we’ll see if that gets deemed a hazard.

If that doesn’t satiate your turn-based strategy needs Big Men Games will be nearby with GUTS. Their demo video is up and looking impressive, but you might want to test out the alpha build of the game that can be downloaded for free on their website. That way you’ll look like a prodigy when you show up to their booth.

For something more interplanetary, Tiger Style Games beings their handheld game Waking Mars with them. Recently nominated for the UK’s GameCity Prize, Waking Mars puts you in charge of molding and directing life forms on what was thought to be a dead planet. We like this game and we’re not afraid to say it.

Bringing two games with the same cute (and weirdly expressive) blob as their protagonist is Notion Games. Up Up Ubi is already on the App Store and Super Ubi Land is gearing up for a PC release. Playable demos of both will be ready for the public when Game On takes place.

Rocksauce Studios will be showing off their impressive app skills, with Textheads, a game that pits multiple players against one another to see who is the fastest texter. Could this be the first typing skills game for the cell phone generation? My thumbs hurt just thinking about it.

Convinced? Then we’ll see you at the Beauty Ballroom (2015 E. Riverside) on Thursday, Oct. 25. If you feel like something doesn’t exist unless you can RSVP via social media, go to the Game On Austin Facebook page and let us know you’re going before sharing the news with your cyber friends.

Have questions about the event? Email gaming@austinchronicle.com or send me a message on Twitter @renovitch.