Michael Rooker teases the return of the zombie-slaying badass 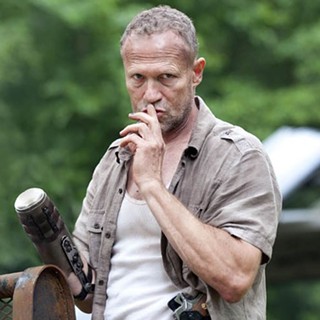 When's Merle back on 'The Walking Dead'? Michael Rooker's not telling (Photo courtesy of TWD Productions)

So season three of The Walking Dead debuted last night, and the series got gorier than ever. Still, diehard fans were left wondering: Where's Merle Dixon, the sociopath missing since season one? That makes Michael Rooker, the man behind the killer snarl, laugh. He said, "They know Merle's coming back, but they don't know when."

The big tease about the older Dixon boy's return sneaked out earlier this year with a photo of the mutilated redneck, and then was confirmed by a trailer that debuted at Comic-Con, showing his grinning mug. "Now, here's about a hug for your old pal Merle?"

"Most people thought Merle was coming back in the season opener," Rooker told the Chronicle, "so the same great fans who are wanting Merle back and were fighting to have Merle back all this time, were like, 'Oh, shit.'" The bait and switch keeps the season unpredictable. "For them, the diehard Merle fans, the only thing missing in the season opener was Merle."

Still, Rooker's OK with that, and he thinks the fans are too. He was checking his Twitter feed and saw that "people are nuts over the show and are loving that the show has come out swinging and kicking ass."

It's not just the undead and the harried survivors getting their asses kicked. The show's brutal schedule takes its toll on the cast too. "Every actor in TV and cable absolutely has my utmost respect, because I've never worked so damn hard in my life," Rooker said. Each episode takes eight to ten days "so by the time you're halfway through the one you're ready for the next one. So you have downtime, and you have days off, but those days off are never really days off because you're preparing for the next episode. … There's no way you can be lazy in this job."

So what can deadheads expect from season three? Rooker said, "People are going to be doing some ass-kicking in this season. Of course, you've still got to have those downtimes, those quiet moments, that help to accentuate the more violent and upbeat moments. It's going to be a great season."

The Walking Dead screens on AMC on Sunday nights, 8pm Central. Michael Rooker will be appearing at Wizard World Comic-Con at the Austin Convention Center, Oct. 26-2.8 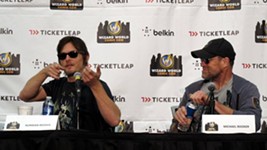 Wizard World: The Brothers of Destruction of 'The Walking Dead'
Reedus and Rooker talk hunting, fishing, and zombie killing