Marc Savlov on how Hitchcock was a family affair 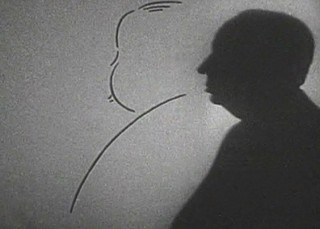 I have a tattoo of Alfred Hitchcock's weirdly accurate line drawing of himself on my right forearm. Upon seeing it, you either know what it is, and who it represents, or you wonder why I've got a cheap-looking black doodle inked on me for all eternity.

Actually, that happens quite a bit. The bag boy at HEB the other day was clearly clueless and, after staring at the tat for a few moments, said something along the lines of "Hey dude, is that, like, supposed to be something or did you just, like, give up on it?"

"You know, Psycho? Norman Bates? Fat British film director? Had a fetish for blondes? Famous the world over?"

Blank look from the bagger. (I think the word "fetish" tripped him up.) Luckily, the blue hair standing in line behind me helpfully chimed in.

"Oh, wasn't he wonderful? You know which one of his I really liked? Strangers on a Train! That Bruno fellow –I forget the actor's name – he was just so wicked! It was on TCM the other afternoon, but I saw it when it came out in the real theatre."

Color me gobsmacked, but thank goodness for little old ladies with a penchant for Fifties-era Hitchcock. At least the bagmaster learned something relevant to the history of cinema, and the abiding memories of gracious, aging female cinephiles. As I grabbed my groceries on the way out, she even declared the tattoo "a lovely little piece of artwork." I wanted to hug her, but figured public displays of affection for elderly strangers are likely frowned upon by HEB. We parted smiling at each other and I'd like to think the bag boy rushed over to Vulcan Video as soon as his shift ended, but somehow I doubt it. C'est la vie.

I got the tattoo in Reno six years ago. I'd just seen a man die and that man was my father. Hitch's profile, I reasoned, grieving, would make fitting remembrance. My dad hated tattoos on principle so what he might have made of my choice gave me a moment's pause, but only a moment's, because Hitch's final film, Family Plot was the very first movie my dad took me to see in a theatre. Released on April 9, 1976, I would have been just shy of ten years old, but, of course, I knew all about Alfred Hitchcock from having previously watched some of the syndicated episodes of Alfred Hitchcock Presents on television (and read Alfred Hitchcock's Mystery Magazine, too).

It was Hitch's mordantly droll intros and outros that bookended Alfred Hitchcock Presents that really hooked me on the man who, many years later, would take up a permanent place of pride on my own thin skin. His corpulent frame and graveyard wit were perfectly in sync with my own budding love for all things weird, outré, and eerie. I'd already discovered the work of Charles Addams via my parents weekly’ New Yorker, not to mention Mad Magazine and, natch, Forest J Ackerman's beloved Famous Monsters of Filmland magazine, the former running several howlingly funny Hitchcock parodies, the latter featuring endless stills from his movies.

So I knew and loved Hitch pretty well by my tenth year, and getting to see one of his movies on the big screen was a huge deal, and one of my favorite memories of my dad and me, sitting in the dark together, scarfing popcorn and Jujubes while Barbara Harris and Bruce Dern planned their big scam. It's not anyone's favorite Hitchcock film that I know of, and watching it recently I can see why: The pacing is strangely off and it's mixture of comedy and con-artistry fails to jell. But on the plus side, John Williams' jaunty score – featuring a very Addams-esque harpsichord that puts me in mind of the late, great Vic Mizzy – remains one of the composer's most memorable pre-Star Wars creations.

Since that April in 1976 I've become something of a Hitchcock fanatic. One viewing of the restored Vertigo is almost always a great way to initiate a fellow filmgoer into the cult of Hitch. It's like that, though, you either love him to death, heh, heh, or you cringe at his infamously sordid off-stage behavior towards women, actors (Hitchcock: "I never said all actors are cattle; what I said was all actors should be treated like cattle" ), and crew members.

But for me, it all goes back to that first screening of Family Plot with my dad. I see Mr. Hitchcock on my arm every single day and then I see, in my mind's eye, my dad and little towheaded me, sitting in the darkened theatre, watching Alfred Hitchcock together. I miss them both.

In anticipation of Saturday’s premiere of HBO Film The Girl, about Alfred Hitchcock’s fraught relationship with leading lady Tippi Hedren, all week the Chronicle staff will be writing about their own relationships – sometimes tender, sometimes tortured – with the master of suspense.