When you're a young film maker, it helps if you've got friends. So when Emily Hagins launches a Kickstarter campaign for her new feature, it's not surprising that she can call on friends like machinima masters Rooster Teeth and poster gurus Mondo to help sweeten the deal.

19 year old Hagins is the original Austin cinematic enfant terrible (or she would be terrible if she wasn't so likable.) Fresh off the success of her latest feature, nerd-vampire love story (is that a new genre?) My Sucky Teen Romance, Hagins is plunging straight into her fourth film Grow Up, Tony Phillips. (Yeah, 19 and on her fourth film. Don't you feel like an underachiever?) According to her website, "It’s a coming-of-age story, but this isn’t an indie drama about a boy becoming a man. It’s a comedy about Tony Phillips, a guy who doesn’t think childhood passions should have an expiration date."

The film is ready to go: No seriously, Hagins wants to film this Fall and Halloween. She has a script, she has the crew, and she even has a cast that includes Fantastic Fest fave AJ Bowen (A Horrible Way to Die, House of the Devil, You're Next) and the thinking fan's scream queen, Barbara Crampton. All she needs now is the money, and that's where Kickstarter comes in. And, as Hagins explains on her website, "Considering we'll be giving Central Texas more of a Halloween-worthy Fall than it actually has, we're going to need all the help we can get."

With 39 hours left, Hagins still needs to raise $10,899 dollars to hit her fundraising target of $75,000. That may seem like a jump, but she's attracted some real heavy hitters to help her out. For $2,500, Rooster Teeth are offering a tour of the studio plus a walk-on part in the next season of Red Vs. Blue: If you're feeling a little less deep-pocketed, Mondo are offering first dibs on any one poster printed in the next year for $400 (don't worry, that comes with a lot of extra perks and presents too, but there are many who would kill for that kind of headstart.) $200 snags you a custom-painted pair of Chuch Taylor All-Stars from Peregrine Paints. If you're really strapped, the donations start at $10 for a button, the film makers' eternal thanks, and the chance to bring AJ Bowen (seriously, one of the best and most undrerated actors of his generation) to an Austin production.

Find out more about the Kickstarter campaign here 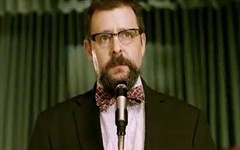