Chet Garner on what's next for TX travel show 'The Daytripper' 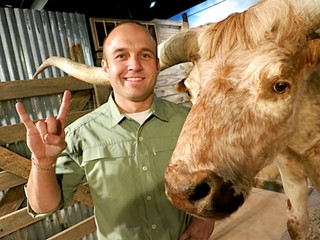 Chet Garner's screen persona on The Daytripper – the public television travel show he created, produces, writes, edits, and hosts – is that of a sort of everyman-goof. Roaming the highways and byways of Texas, he finds undersung spots and cries giddy, grinning hosanna.

He'll try anything once, is always good for a laugh (often at his own expense), and even has his own catchphrase ("Vaya con Dios, amigos!"). In short, a heckuva fun traveling companion.

We recently swapped emails with Garner on the occasion of The Daytripper's fourth season debut this week. The season kicks off with a trip to Kemah, TX (Bay Area Houston), and it airs locally this Thursday, Oct. 11, 7:30pm, on KLRU. (The show repeats Saturdays at 10am and Wednesdays at 5:30am.)

Can't wait till tomorrow? The Daytripper gang is currently taking part in a 4-city/4-days watch party tour at Rudy's BBQ locations around the state. Tonight, they'll be at the 360 location. Bring a couple canned goods, and in return you'll get a 1/4 lb. of brisket and an early peek at the show. (You can find out more on The Daytripper blog here.)

Austin Chronicle: In the first episode of the new season, you get to play at being an astronaut, stuff your face with hoagies and fried shrimp, and ride carnival rides at the Kemah Boardwalk. My question is: How did you get this job, and where do I sign up?

Chet Garner: I gotta agree that this is pretty much a dream job. When I was wasting away in my office as an attorney I was thinking a lot about the perfect job that combined Texas, travel, BBQ, and swimming holes all while inspiring others to live with more adventure. I checked Craigslist for openings and didn't see anything, so I decided to just make it up.  And that's the truth.  I grabbed my wife and some friends, hoped in the car and shot a pilot episode. From there it has just taken off.  I'm a believer in doing what you love regardless of whether or not someone is willing to pay you for it.

Austin Chronicle: What's the process like for you and the team? I imagine a lot of research has to happen before you get in the car. Do you piece out production shoots throughout the year, or do y'all just knock 'em off in one long road trip?

Chet Garner: I've spent my whole life traveling the back roads on endless road trips. So in many ways The Daytripper is the culmination of my life's work (so far, at least).  But even now, I spend a lot of time traveling to scout locations. The places I like generally don't advertise, so the only way to did them is to stumble into them. I eat a lot of mediocre BBQ. But you gotta do that to find the truly amazing ones.

As for our process, I pick the locations and basic outline of the show. Then we hop in the car and go make magic happen. About 80% of my ideas pan out in the field and the other 20% is filled with things you never could have planned for – like [storied Houston Oilers and New Orleans Saints head coach] Bum Phillips wandering into the restaurant in Goliad. At the end of the day we make unscripted TV. It's always like lassoing the wind.

And then when we shoot we mix it up. Some epic road trips. Some one off shoots. It is all dependent on locations and crew and costumes and moon cycles.

Austin Chronicle: Going into your fourth season, you've seen a lot of Texas. Have your expectations ever been way off about a place? Gotten yourself into any sticky situations? What's been your favorite day trip so far?

Chet Garner: I scout every place before I bring the crew. So by the time I’m ready to film I know the town backwards and forwards. Now I have gone to scout locations and been surprised at how little cred some small towns have because they really are awesome.

Now when we are filming there have been some sticky spots. In Beaumont we were filming the refineries and someone saw the cameras. Next thing I know is we are assuring the cops that we aren't terrorists plotting to blow up the entire refinery.

Austin Chronicle: Can you give us a teaser of the upcoming season?