How To Support Your Local Filmmaker Without Leaving Your Sofa 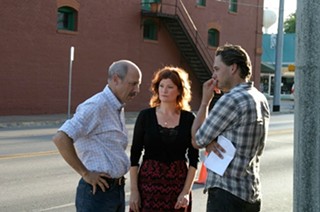 Out on VOD and DVD today is the feature debut of writer/director Berndt Mader, a University of Texas alum. 5 Time Champion is a Texas-set coming-of-age story about a sexually confused science prodigy negotiating puberty and complicated relationships with his mom and grandparents.

The film world-premiered at SXSW 2011 and then toured the festival circuit, winning the Texas Filmmaker Award at the Dallas Film Festival. The Chronicle spoke with star Dana Wheeler-Nicholson during the film’s SXSW run:

"It was an impressive, beautiful script. It's unusual to have a movie like this in our times from someone so young," she said of Mader. "There's no irony, no trying to be hip."

5 Time Champion is now available on VOD and DVD. It’s also available in the Tugg library, so if your home flat-screen sounds too small to properly enjoy the Smithville-shot vistas, you might consider raising the flag for a theatrical screening.