From the Vaults: 'Please Give' Spouses Swap Partners

I know they're not really married … in the movies or in real life. Why, then, should my mind hiccup when I see two actors who play characters that were married to each other in one movie appear together in an ensemble film a couple of years later, but are now playing characters that are married to others? 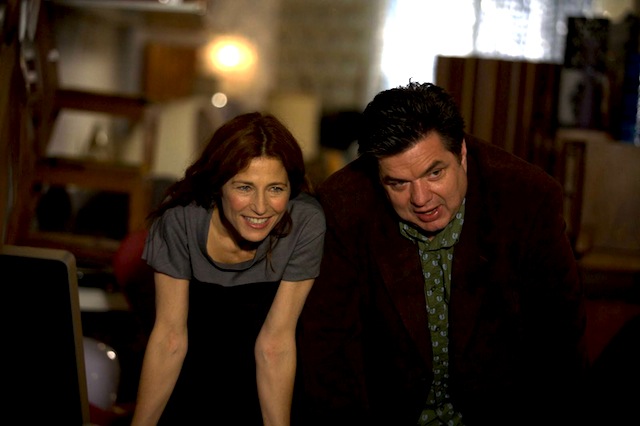 In The Oranges, which opened at Austin's Arbor Cinema yesterday, a middle-aged married man has an open affair with his best friend's daughter – a girl who is half his age. It's an ensemble comedy and Hugh Laurie plays the husband and father who falls for the 24-year-old played by Leighton Meester. Her parents, played by Oliver Platt and Allison Janney, are best friends with a couple who live across the street, played by Laurie and Catherine Keener. The foursome playing these two couples are among my favorite working actors. Despite that, predictable family dysfunction in The Oranges allows your mind plenty of time to wander. And a thought in the back of my mind kept piercing through with the reminder that all of this had to be make-believe because Platt was really married to Keener, not Janney. You see, in Nicole Holofcener's pleasantly rankling comedy of 2010, Please Give, Oliver Platt and Catherine Keener (a Holofcener regular) play the married couple at the center of this amusing story about altruism in the modern age. Is if fair that my mind doesn't completely accept these actors appearing in the same sphere only two years later, but married to others?

Is this the movies' version of an optical illusion? It doesn't help matters that the characters in Please Give have a believability that the characters in The Oranges never come close to attaining. On the other hand, my mind easily accepts that Platt and Janney are playing a married couple in The Oranges even though I've seen them together before as characters on The West Wing. Is it a matter of timing – two years not being enough to erase the vividness of characters previously played? Certainly I have no desire to throw additional impediments in the way of actors lining up work. But neither will I apologize for, though I hereby confess to, the roadblocks my mind unintentionally puts up against each movie's version of the truth.

Our reviews: The Oranges, Please Give