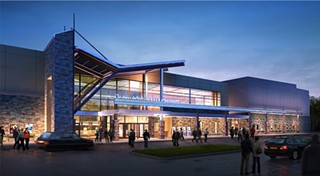 Northwest Austinites not wanting to cross 183 to enjoy the watching-movies-while-you-stuff-your-face experience will have a new theatrical option come November.

The Galaxy Moviehouse & Eatery – already dubbing itself, rather ballsily, "Austin's premier movie and entertainment destination" – will throw open the doors on Friday, Nov. 9 to its new 11-screen venue. It promises a mix of auditoriums – 5 dine-in and 6 traditional (read: no clanging forks or ninja waiters to contend with). Other amenities include D-box seats and a full-service bar. The theatre is located at 8300 FM 620 North, at the corner of North FM 620 and Concordia University Drive just north of 2222.

Also in dine-in theatre developments: Don't everybody freak out, but the Alamo Drafthouse's Austin theatres are moving to 100% reserved seating. Meaning, when you buy your ticket, you preselect your seat, thus eliminating long lines in the lobby but also any spontaneity in where you park your body. A pilot program at the Village garnered "near-universal raves," at least, according to the Drafthouse blog; the lively comments board suggests some dissent (we especially like the commenter who worried about getting stuck next to "a mouthbreather or a child"). The changeover happens Oct. 15 and comes with no upcharge.

Speaking of not freaking out, if you absolutely must see paparazzi shots confirming Ryan Gosling and Rooney Mara's presence in our fair city – they're shooting a film with Terrence Malick – you can scrounge around Just Jared for all kinds of icky-stalker shots. But if you did that, you'd be part of the problem, and we both know you're better than that. BE COOL, AUSTIN. BE COOL.

After five years knocking it out of the park as Austin Film Society's director of marketing, Agnes Varnum is departing the organization for a position at the Texas Tribune. (We take comfort in knowing we'll see her at office parties: She married the Chronicle's long-time Music editor Raoul Hernandez this summer.) Taking over the reins as AFS' main marketing honcho is Stephanie J. Baker, whose CV includes stints at SXSW and Bon Appétit.

Also new to a job: Heather Page has been announced as the Texas Film Commission's new director. An Austin camerawoman whose credits include The Green Mile, Armageddon, and local TV productions Friday Night Lights and My Generation, Page succeeds interim director Evan Fitzmaurice.

At Monday night's News and Documentary Emmy Awards, Where Soldiers Come From took the prize for Outstanding Continuing Coverage of a News Story. Before airing on PBS' POV series, the documentary – directed and produced by Heather Courtney and co-produced by Megan Gilbride and David Hartstein, all Austinites (and featured in this Chronicle 2011 cover story) – won an Independent Spirit Award. Hearty congrats/high-fives to the whole team.