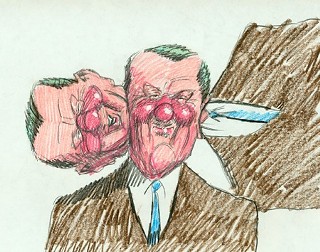 Watch Plympton's shorts rather than this half-baked doc.

The fact that Adventures in Plymptoons! (Cinema Libre Studio, DVD $19.95) has a director and a producer boggles the mind. If this documentary about the Oscar-winning animator Bill Plympton had direction at some point it was lost in translation. What's left is an excuse to show in-jokes and poorly executed gags.

Most famous for his mid-80s short “Your Face,” Plympton became the poster child for independent animation just as independent films were taking off. Add to that a swell in the popularity of animation with movies like Who Framed Roger Rabbit? and popular Disney fare of the time, and you have the makings of a star. And to be a recognizable name as an animator is to join only a handful of others allowing Plympton to go so far as to reject an offer from Disney for $1 million to animate the Genie in Aladdin.

This documentary couldn’t be a less flattering tribute despite its attempts to flatter the man at every turn. Technically the film is a mess with poorly shot interviews, chintzy backdrops, and edits a film-school freshman would be embarrassed to have in a final product. Interviews with the likes of Ed Begley Jr. and Moby, instead of offering insight into the man who still hand draws all of his cartoons are used solely for “humor” (the quotation marks are necessary, trust me). Ron Jeremy’s simulated blow job as he speaks casually to the documentarians is especially awkward.

Even the material from Plympton himself damns him. “Having sex and hearing people laugh are my two favorite things in life” he says. Framed as it is on this DVD, instead of making Plympton sound honest and real, the viewer watches the credits thinking not that he's relevant and rabidly independent artist, but that he’s instead a creepy aging man. The parade of exclusively young, fawning, female assistants doesn't help.

Extras include footage from Bill Plympton Day in Portland, Ore., which is like an unedited Q&A at a film festival; Gus Van Sant featured in an off-the-wall silent film spoof; an advertisement for his book Make Toons That Sell; and a preview of his work in progress, Cheatin’ (which would interest any fan). What might interest them less is the Easter Egg featuring a topless Annie Sprinkle doing the “pencil test” to measure the size of her clearly ample breasts. I rest my case on that creepy vibe I mentioned earlier.

Downton Abbey: Seasons One & Two, Limited Edition (PBS, DVD $59.99; Blu-ray $64.99) includes the Christmas Special and the usual extras giving insight into the costumes and the historical context of the show. But honestly are you watching to learn something or to get your fix of corseted double-crosses and cuff-linked love stories?

Now available on Netflix streaming is the Kickstarter funded and film festival buzzed Indie Game: The Movie (Blinkworks). If you can make a documentary about independent game developers emotionally engaging to the nongaming world you’ve obviously done something very right.