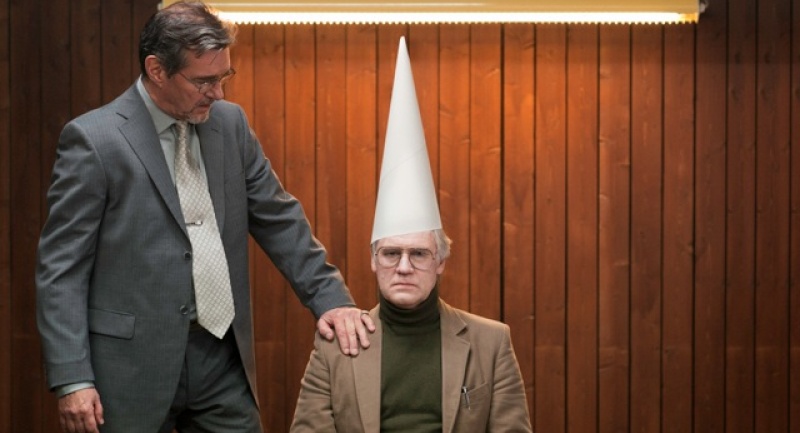 From I'm Alright, Jack to The IT Crowd, office farces have been a mainstay of European comedy. The tiny surrealism of ludicrous heirarchies and pointless tasks finds charming life again in Sweden's Flicker, as a hapless cadre of telephone company employees contend with unreliable technology and erratic relationships.

The site of the chaos is Backberga, which (in spite of being the antithesis of a thriving metropolis) somehow manages to support its own telecom company. It's a firm of schlubs, but the schlubbiest is Kenneth Skoglund (Jacob Nordenson), a beige-toned number cruncher with aspirations to looking like Ted Danson. All he wants from life is a working computer and maybe a little romance, but IT department disdain, wet floors, crazed blind dates and a dysfunctional relationship with his boss Tord (Kjell Bergqvist) means his life is one long face plant.

Writer/director Patrik Eklund scored an Oscar nomination in 2009 for his love-lorn conjurer comedy short Instead of Abracadabra. In Flicker (or Flimmer in Swedish) he creates a self-contained world that won the hearts of Fantastic Fest Audiences, and walked off with the AMD Next Wave award for best film too boot.

It's reminiscent of another Fantastic Fest Scandinavian charmer, 2010's metronome-powered oddball Sound of Noise. It even shares the idea of off-kilter anarchists (in Sound of Noise, it was guerrilla percussionists: Here, there's a band of anti-radiowave activists on the loose, hell-bent on denying the people of Backberga decent 4G coverage.) But unlike that hard-driving rhythmic oddity, Flicker lets you bask in its quirky glow.

And, yes, if you're wondering, the whole telecoms things is a very light-handed metaphor for personal communication. The gags are often the stuff of high farce, but the ensemble cast that flows out from Nordenson treat them all with a dead pan sense of wit.

Part of the charm comes from the feeling that Backberga is a back water, a town that somehow has leaped straight from the 1970s into the smartphone era. The collars are too broad, the ties too wide, and the boardrooms of Unicom are filled with jowly graying men. The office staff aren't really white collar – more sort of a grimy, worn-one-day-too-long collar. Eklund catches perfectly that heavy sigh just before everyone straps on a smile before work, and somehow, in the middle of all the gentle silliness (electrocuted testicles, a janitor terrified of spiders, and home-made scented candles) he finds a little bit of tender joy. The residents of Backberga are a forgiving lot, and that's the most charming part of a film that treads a fine line between bizarre and heartwarming.