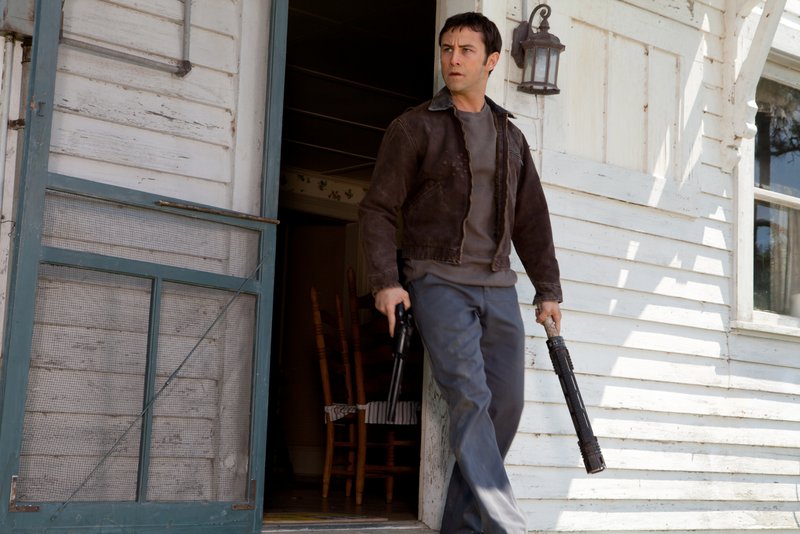 "He's acting from a very selfish place to protect this pile of silver." Director Rian Johnson on Joseph Gordon-Levitt in 'Looper'

Sci-fi time-twister Looper may be the kind of genre movie that comes around once a generation and rewrites the rules, straight from the noir-fueled brain of writer-director Rian Johnson. "Noir gives you an opportunity to bring out the good and the bad in people."

Johnson was in Austin at Fantastic Fest for a sold-out Looper show, but before the screening he was hanging at the Four Seasons. His old friend Joseph Gordon-Levitt, who plays selfish hit man Joe, was supposed to be there but a pressing appointment on Saturday Night Live had kept him in New York. Instead, co-star/Johnson regular/Fantastic Fest bumper contest winner Noah Segan is talking up a (time) storm to the press. He cheerfully and charmingly explains why his incompetent gat-wielding Kid Blue is the film's real hero, examining the difference between its future-now and future-then, and throwing out temporal mechanics and causal theories behind the film's head-scratching world of cause and post-effect.

Looper started life a decade ago as a two-page outline, and sat on the shelf for years. The reason? Writing time travel is nearly impossible. "It's just a beast. It's just a really tough thing to work into a two hour film and not have the weeds overgrow the garden," Johnson said. "That could have been one of the reasons why I put off writing the feature for eight years." It's writing school 101: Never try a time travel story, because down that path madness lies. That, and constant criticism from film nerds picking apart the back-and-forth. Johnson explained that he knew how he wanted the film to end, and that meant pulling the back-and-forth Maguffin out of the script bag "I just came up with this notion, and it required time travel. It's not like I set out to do a time travel story."

After a ten year trek to the future, the film arrives just as Gordon-Levitt is finishing out a monumental year by reuniting with Johnson. The pair first worked together for 2005's indie high school noir Brick and have stayed friends ever since, but now Levitt is a Hollywood playa. After sterling reviews for his work in another headscratcher, 2010's Inception, and getting the critical all clear cancer buddy comedy 50/50 last year, in 2012 he stepped into the bat's shadow for Dark Knight Rises and had a late summer hit with Premium Rush. With a trip back to the Civil War for Steven Spielberg's Lincoln still scheduled, it's really become the Summer of Joe. While Johnson said it was "nothing but advantageous for us," it was a complete accident. He said, "I didn't realize until we were in post-production that it happened to line up with all these movies that he had shot over a couple of years all ended up coming out in one summer." More importantly, he said, "It's always fun to see your friend on the rise."

With the help of some prosthetics, Gordon-Levitt plays a younger version of his older self, portrayed by Bruce Willis. Johnson sent the action icon the script first, and expected a 'no' because it goes to "some very dark, un-Bruce Willis-like places." However, this is the same Willis that signed up for 12 Monkeys and The Sixth Element over generic actioneers, and he quickly said yes. "It was almost disconcerting how easy it was," Johnson said. He'd expected some push back over how far 'Old Joe' was prepared to go to fix the future: "Not only was there none, but that was the stuff that he was most excited about diving into."

But the film still depended on Johnson finishing the script. Two years ago he finally started drafting the final version. To write his way out of a time roundabout, Johnson looked at the classics of the genre, like Primer for its undeniable elegance, and The Terminator, "for the way that it uses time travel to set up the situation, but then time travel gets out of the way." His biggest lesson may have come from Back to the Future, and Looper proudly folds in a nasty little homage to Robert Zemeckis' 1985 classic. He called the tale of Michael J. Fox and a DeLorean "a perfect script, and just story-tellingwise it is so tight, but you can look at the time travel logic in that movie and take a step back and start nit-picking, and say 'This doesn't make sense' or 'That doesn't make sense,' but it doesn't matter because the story telling makes up."

The key lesson Marty McFly teaches, Johnson said, is that audiences will be very forgiving about temporal mechanics if they understand the film maker's ideas. "Realizing that it had to work on a story-telling level, that was a really liberating notion for me," Johnson said. "Like the pieces of the brother's arm disappearing in the Polaroid. That intuitively makes sense. I get what's happening. He's changing the past, so the future is changing. If you literally think about it, if he actually started changing the past, they wouldn't start fading away. Suddenly they wouldn't have taken that Polaroid, it would have disappeared from his hands, and who the hell else knows what else would happen?"

Time travel films depend on two things: A then and a now. In Johnson's case, he has two 'thens': A collapsing near-future of the loopers (which Segan called a post-manufacturing world, where only the best-made items survive) and another future after that, from where gang lords dump victims back in time. Oddly, they were almost the after-thought. Johnson said, "Every ounce of sweat was going into taming the narrative elements of it, so we really only started to work on the world when we sat down in pre-production. Ed Verreaux, our production designer, and I, we sat down and it was just a matter of taking it piece by piece."

Like the story drove the time travel machine, it was character that drove the design. Johnson said, "He's acting from a very selfish place to protect this pile of silver. It made sense then to make the world feel as desperate as possible, and make you realize that, if he loses that silver, he's in a very bad place." He could have still set it in a roughed-up parallel now, but "it just seemed cleaner and easier for me to go near-future, and then we could have hover bikes and weird cell phones and crop duster robots and all the things that people pay money to see."