Forget Saturday night: This is the sketch comedy show to watch 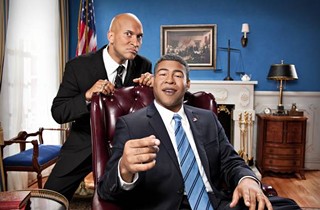 You're going to have to wait until the second episode of comedy sketch show Key & Peele for the return of Jordan Peele and Keegan-Michael Key's signature skit featuring the ever-unflappable President Obama and exploding-id Luther the Anger Translator, but the prez still figures into tonight's debut.

The comedy duo (and MadTV alums) got to meet Obama this summer, a story they relate in the opening monologue of tonight's season 2 launch (airing on Comedy Central at 9:30pm CST), and they were clearly smitten. But that didn't stop 'em from conceiving of a college-age Barack rallying the troops for a major rager (“That is some righteous bud we got there”), in an amusing if not particularly revelatory thread that runs throughout the first episode. But there's no shortage of seriously funny shit in the debut ep, including a wordless, perfectly pitched sendup of Bruckheimer/Bay-like action inaneness; the introduction of Mary Magdalene's pimp, Gallileroy; and a razor-sharp Civil War reenactment skit that answers a question no one thought to ask: Yes, Jordan Peele can do a mean Butterfly McQueen impression.