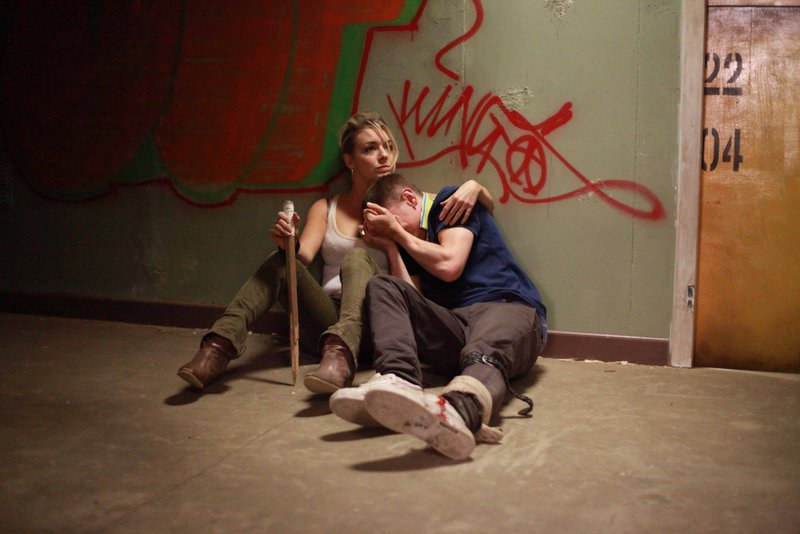 Writer James Moran on Sheridan Smith, Jack O'Connell, and the other residents of his 'Tower Block': "They're just full of normal people, good and bad, trying to live their lives."

Writer James Moran has played a key part in the history of Fantastic Fest. In 2006, his business horror Severance made the short list of films to play both there and SXSW. This year, he has two scripts on screen: comedy horror Cockneys Versus Zombies and survival shocker Tower Block. So where's he been for six years?

Well, he never really went away. He's just been riding the wave of British genre TV, that's where. Moran said, "After Severance I had a couple of bad movie experiences, around the same time my TV career was starting, so I just stayed away for a while."

Now he has credits on Dr. Who, Torchwood, Primevil and MI-5 cluttering up his IMDB page. It was perfect timing: Pre-Severance, there was no genre TV in the UK: Sci-fi and horror was stuck in the zero-budget TV ghetto. Moran said, "Doctor Who returned and kicked genre back into full swing, so I was suddenly in demand." He called the UK genre TV scene "a very healthy place, which is great for me as a viewer and a writer. The TV companies have finally realized that if you hire passionate people who love the genre, then you'll get good TV shows."

He credits CvZ director Matthias Hoehne and his team with luring him back to the big screen. "[They] convinced me to come back, and I realized I just had to choose nice, fun, creative people to work with, like them."

His next project, Silent Night of the Living Dead, is already in pre-production with another FF veteran, AJ Bowen signed up. But for Tower Block he managed a serious coup for his leading lady with Sheridan Smith. She's another escapee from/alumnus from TV, having cut her teeth on British blue collar cult comedy Two Pints of Lager. But aside from Tower Block, she is now a major star of London's West End, and seems to be gearing up to be the new Maggie Smith. But as Becky in Tower Block, she's hunkered down between two threats: An unseen sniper, picking off the last residents of a condemned apartment complex.

The trigger for the massacre is another death: The whole building turns a blind eye when one of their own is kicked to death in the corridor. Moran said, "I wanted to explore that world where you see violence happening, but are too scared to intervene in case you get stabbed or shot – but if you don't, then you've essentially allowed it to happen. Neither reaction is right or wrong, but both can have terrible consequences."

If Becky is the film's conscience, then the black heart of pragmatic survival is Jack O'Connell (Skins) as Kurtis. He's the resident petty thug/drug dealer who has just been ousted as king rat. Moran called Kurtis "a character in search of a script, for years. I thought it would be a nice idea to have a guy demanding protection money who is then faced with a genuine outside threat – naturally, the residents would say 'well what are we paying for?!'"

Rather than some pat form of redemption, Moran wrote Kurtis as taking an innovative approach to survival and community. For Moran, that's essential, to make sure that he's not a stereotype. He said, "Even though he's the criminal resident, he's not as simple as that, hopefully.