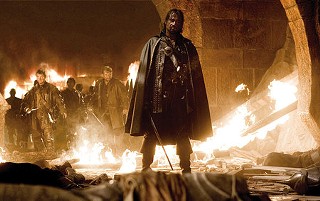 Although Solomon Kane screened at Fantastic Fest 2009, this handsomely produced adaptation of Weird Tales icon Robert E. Howard's other ancient scrapper is only now getting a fitful release. So fitful, in fact, it was just pulled from its slated Friday opening in Austin – but it's readily available on video-on-demand.

It's too bad Solomon Kane has sat on the shelf for so long, because it's actually one of the better period genre outings to come along in years. It's certainly far better than last year's Conan the Barbarian, from the increasingly irritating remaker-for-hire Marcus Nispel (The Texas Chainsaw Massacre, Friday the 13th).

Opening with a bang in 16th-century North Africa, Kane (James Purefoy, taking things very seriously, to his credit) is a pious mercenary, swathed in his trademark hat, leather and robes and edged weaponry, and ready to put his past life of bloodshed and evisceration of heathens behind him. This is the rare antihero who's actually righteous in word and deed – or, at the very least, aware of the cardinal sins he's committing every time he skewers a non-believer or an agent of the dark forces. (Nicolas Cage's Season of Witch is comparable, but atrociously so; of the two, this is the far superior film.)

Enter a Puritan family led by William (the late Pete Postelthwaite) and his daughter Meredith (Rachel Hurd-Wood), the latter of whom falls prey to the sorcerer Malachi (Jason Flemyng) and his band of merry demonic ghouls, thus forcing Kane out of his semi-retirement and back into the unholy fray. Max von Sydow turns up as his father at one point, but really, it's all about Kane's search for redemption at a time when heroes of his sort walked the knife edge between heaven and hell with zero room for slippage.

Purefoy does a fine job playing up the conflicted killer, and Michael J. Bassett's direction is appropriately grim and humorless. Which is perhaps why the film has had such a scattershot release: Kane eschews quippy one-liners while dispatching the damned, fearing of course that he may soon be joining their ranks. Not our current idea of a Saturday afternoon matinee superhero, but a hero nonetheless.