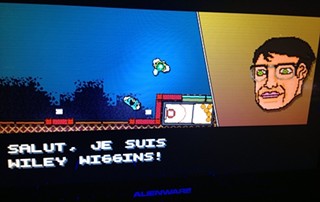 The Fantastic Arcade ended with two gaming geeks going head to head in Starcade followed by the award ceremony, both hosted by Wiley Wiggins who continued his four-day streak of superlative mic handling.

Starcade, based on the 80s game show of the same name, alternated between rounds of questions and classic game contests with one random pint-chugging contest. The scoring was a bit random but after impressive turns at Millipede and Ladybug some guy with a gnarly beard came out on top.

After that, Capt. Wiggins, clad in a faded fuchsia corduroy blazer began handing out the awards. All of the games get informal prizes, usually with lengthy names. When it came time to hand out the award for the winner of the Gamemaking Frenzy Austin’s game-developing patriarch, Richard Garriott, handed a custom made crossbow to the winners. With a deadly weapon now officially in the HighBall there was thankfully just two more awards to go. The Audience Award went to the minimal arcade game Super Hexagon. The bloody homage to 80s flicks Hotline Miami took home the critics award. When Wiggins asked for a T-shirt from the game, one of the members of the Dennaton development team literally took the shirt from his back and gave it to him. Wiggins, for symmetry’s sake gave his blazer in return.

Most Fantastic Game to be Later Cited by the Mainstream Media as the Reason for a Mass Shooting:
Hotline Miami (Dennaton)

Most Fantastic Way to Learn That if You’re Ever Put in Charge of Anything Important, Everyone Will Die:
FTL (Subset Games)

Most Fantastic Grim Reminder of the Military-Industrial Complex and the Effect Upon the Common Man:
Unmanned (Molleindustria)

Adventure Time Game Making Frenzy Second Place:
Must Party Forever (One and a Half Beards)