In which I get a taste of blood and victory 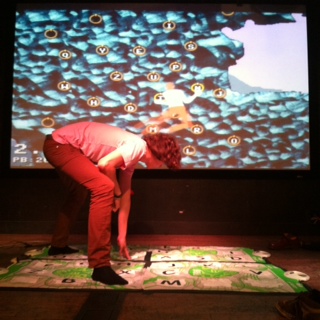 The Arcade has one thing on its film-centric sibling: The stars of the show aren't on the red carpet. The developers generally stay for the entire fest playing one another’s games and mingling with the crowd of game-lovers and -makers. All that schmoozing makes the panels informal and unpredictable. Saturday was no exception. Here are the highlights:

Showcasing the process of iterating their game, Luftrausers, from a 48-hour pet project to a polished game, Rami Ismail and Jan Willem Nijman, aka Vlambeer, proved themselves to be the same charming duo as last year. At Fantastic Arcade 2011 the burgeoning indie was just recovering from having their flash game idea stolen before they could get it onto the App Store themselves. Yet Vlambeer's 2011 talk had a refreshing lack of bitterness and, showing their commitment to the freedom of ideas, the team showcased other unreleased games, inviting but certainly not encouraging cloners to do their worst. Since then the two have found success with games like Super Crate Box, Dinosaur Zookeeper, and Serious Sam: The Random Encounter. Their latest game is playable at the Arcade but it’s still getting some finishing touches before being released to the public. Ismail and Nijman joked about ideas gone wrong and right, but the point that kept creeping back into the presentation was that with all games -- especially arcade style games like Luftrausers -- the details are what make something feel good. Even barely noticeable design choices like subtle camera movements and water dripping from a plane as it exits the ocean are what make a game feel right. As Nijman said, “It’s the most obscured, abstract things that affects the game concretely.”

Hotline Miami is the alternate ending to Drive.

Dennaton Games began their presentation with a scene from Drive, a movie that influenced the 80s-tinted violence of their game Hotline Miami. The moment in the film is pivotal in that it’s the moment Ryan Gosling’s character must decide between going of the rails and into start racking up a body count or keeping his head straight and morals somewhere within reasonable parameters. Instead of ending with 20-odd corpses on the floor of a pizza parlor, Drive ends with Gosling riding into the night even though his happiness is in the other direction. Hotline Miami instead features level after level of fast-paced and bloody kills. The throwback graphics and surreal tone make the violence slightly cartoonish, but when you’re pressing the space bar to slam a persons head to the ground until it explodes feels pretty personal. The presentation ended with a new live-action trailer for the game that could have been promoting one a torture porn flick in the film festival. But instead of going out on a dark note, the development team tacked on 10 minutes or so of cat video clips culled from America’s Funniest Home Videos. Strange but welcome (and surprisingly funny).

I am the best Super Hexagon player in the world.

Before we get to that obvious lie, the first tournament of the evening was Mega GIRP. To play, contestants removed their shoes and took to a dance pad on the floor to control a mountain climber on the big screen (see picture). The controls couldn’t be more counterintuitive, making the game that much more fun and that much more embarrassing to play in front of an audience as players contort to hit the right portions of the mat without falling from the mountainside. I did not fare well in that tournament.

OK, I’m nowhere near the best Super Hexagon player, but I was at least the best player in the HighBall as I was declared the victor of the tournament. It wouldn't last as almost immediately after the tournament's conclusion the game’s creator, Terry Cavanagh, by request took the controller and nearly doubled my time. Anyone who was impressed by my score quickly forgot who I was, and my 15 minutes of fame was up 14 minutes early. But, hoo boy, that was a sublime minute.