FF2012: Barking Up a Storm at the 'Frankenweenie' World Premiere "I welcome death." Winona Ryder gets cheery at the Fantastic Fest premiere of 'Frankenweenie' (Photo by John Anderson)

Ever wonder why people love Fantastic Fest so much? There was a woman at last night's world premiere of Tim Burton's new masterpiece Frankenweenie, and a lot of people were commenting on how great her dress was: A perfect Wednesday Addams outfit, but for a grown-up. That got the comments, not that it was Winona Ryder wearing it.

Austin's favorite genre festival has had some big debuts before, but nothing of the scale of Burton's long-awaited return to stop-motion. The story itself is the stuff of legend: In 1984, he made a short for Disney about a boy that brings his dog back from the dead. Disney politely showed him the door, but nearly three decades later the feature-length version is this fall's tentpole release for the House of Mouse.

"We could just play Frankenweenie on repeat for the next eight days and that would be a damn fine festival," FF jefe Tim League told the audience before introducing the cast and creators. All of them seminal parts of his VHS-fueled childhood: "My secret girlfriend" (la Ryder), "the creepiest dude in Alone in the Dark" (Martin Landau) and the man who "created the most visually unique universe and then did it again and again and again." That would be the one and only Burton.

With five theatres showing the big premiere, it was a crapshoot which screen you got: The Q&A screening, complete with Ryder, Burton, Landau, the voice of the new young Victor Frankenstein Charlie Tahan, and Burton's long-time stop-motion producer Allison Abbate; the three regular screens with a simulcast of the stars; or, if you got really lucky, the doggy screen, where proud pup owners and costumed canines sat together. Made sense for Burton. "I've gotten many comments from people that their dogs like my movies," he mused. 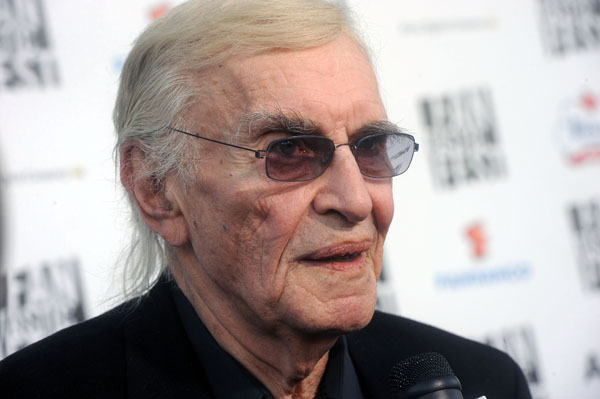 "At the top of the mountain." The legendary Martin Landau talks up Tim Burton at the Fantastic Fest premier of 'Frankenweenie' (Photo by John Anderson)

There's a lot of people that like his work, too, including the immortal Landau. Back with Burton for the first time since his uncredited cameo in Sleepy Hollow, he upstaged the entire evening when he took a brief tumble off the stage. "Bad entrance," the uber-veteran laughed as he was restored upright. ("Martin does that every time," deadpanned the director.) For Landau, Burton is "at the top of that mountain" with other legends with whom he's worked – Hitchcock, Woody Allen, Joseph L. Mankiewicz. He said, "A good director creates a playground for the actors, and he does it so quickly."

Ryder is the definitive Burton regular, but another old ally, Burton's consistent composer Danny Elfman, gave her a particularly wonderful gift for this film: The wonderfully unnerving New Holland Song. "There's something very creepy about it," she said, "The lines about 'modest homes at modest prices.'" Just don't ask her to sing it again. Quoting her character Elsa when League begged for a verse, she darkly intoned, "I welcome death."

Unlike her earlier Burton work, this time around, the actor's playground she shared with Landau was the voice-over booth. It was the stop-motion folks who had the long haul. However, 3D gave them new opportunities. According to Burton and Abbate, it meant being able to really show the detail of the miniature cosmos. It's also a little subtler than the old 3D that Landau grew up with, like House of Wax. "Talk about 3D," he said. "Back then, everything fell in your lap."

One technological development they won't be adopting? The new super-high frame rate. Abbate said, "That's more frames we have to shoot? I don't want that."

Burton was a little blunter. "There would be a revolt amongst the animators."

And that's what it still comes down to. As Abbate noted, stop motion is still "a guy, alone, in a dark room, pushing a puppet one bit at a time." And what happened to these puppets? The cast got to take them home. Ryder said, "I have my Elsa puppet and I literally stare at it for hours. Just the stitching and the collar and it's just amazing."

See our full gallery from the Frankenweenie premier here, and follow all our coverage, reviews and interviews at austinchronicle.com/fantastic-fest.