FF2012: Day One of Fantastic Arcade

It's all about money, stories, and nerds.

The first day of the Fantastic Arcade at the HighBall was unofficial local developer day with Stoic showing off the beauty of The Banner Saga and White Whale Games discussing the bookish roots of God of Blades. Some of the nonlocal developers had panels too, including Terry Cavanagh discussing his wildly addictive Super Hexagon.

Here are some facts gleaned from day one of the Arcade: Stoic shows off one of their horned creations.
Stoic Studios is sparing no expense.

This might sound like a bad thing. Waterworld and the Titanic both spared no expense, and look how those endeavors turned out. In this case the combined experience of the three studio members has led to great decisions on how to spend the wads of Kickstarter money they earned for The Banner Saga. That’s more than $700,000 in case you were wondering (they only asked for $100,000). Some of that money went to pay in-demand composer Austin Wintory, who just came off his lauded work on indie darling Journey. Other funds went to locals Powerhouse Animation, who, judging by the stylized snowy vistas and rotoscoped characters, help achieve what Stoic is calling a Sleeping Beauty aesthetic. The gameplay itself revealed a complex, turn-based system that played smoothly and looked as good as the cut-scene portions they showed. They talked briefly about the rotoscoping process of filming live actors and animating over that to create life-like movement. Turns out most of the characters were based on footage of the developers themselves with Alex Thomas admitting, “All the big, lumbering horned guys are me.” After the Stoic panel, composer Austin Wintory took the spotlight to discuss his creative process arranging soundtracks for Journey, The Banner Saga, and other past projects. After establishing that music originated as augmented storytelling, Wintory showed the power of music by playing a scene from a movie he sound tracked without the music, with his music, and with the soundtrack to The Dark Knight. Each take of the same scene offered vastly different experiences for the viewer, and Wintory won over the crowd in the process. Audience members were largely curious about the interactive composition that helped tell the story of Journey, a game that has no dialogue. Wintory made convincing arguments to claim interactivity is the biggest advancement in music since the ability to record sound. Combine that with the young and rapidly changing world of games that Wintory called “Lewis and Clark kinda shit,” and you have an exciting combo of burgeoning art forms. 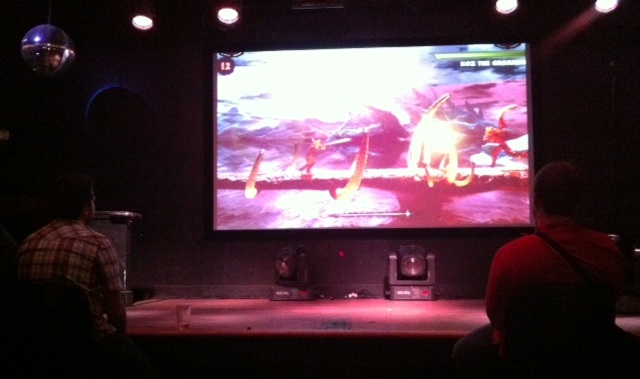 The winner of the God of Blades tournament goes up against the game's programmer.
White Whale Games are a bunch of nerds.

I don’t think they’d have a problem with me saying that. Their game, God of Blades, is set to be released next Thursday. The main focus of their panel discussion was the primary influence of the printed word on games, more specifically the largely forgotten sci-fi novels of the 70s and 80s. Studio member George Royer sounded like the information science doctorate student that he is, saying that the game was “using digital media to describe analog decay.” Don’t think the game is an interactive thesis statement; it’s more of a Frank Frazetta painting come to life. That look was something Creative Director Jason Rosenstock wanted from the start: “We didn’t want to make a game," he said, "unless we could make it look like a fantasy painting.” Judging by the small portion of the game shown, we’d have to say they look pretty successful on that count.

People get as much joy as frustration from Super Hexagon.

Terry Cavanagh’s minimalist arcade game was one of the more popular Spotlight Games at the Arcade. The object of the game involves little more than avoiding walls that are constantly closing in on your little triangle that can move around a central hexagon. The screen turns, pulses, and changes color to try and throw you off your game. After 10 or so games that last only a few seconds, it’s easy to get excited when you last as long as half a minute. If you see the initials JAR on the high score list, oh, that’s me.

Tomorrow has some less-indie crews coming out with Sony, Adobe, and Steam showcasing what they can do for the small developer. If panels aren’t your thing, the party tomorrow is courtesy of Montreal gaming collective Kokoromi and local game-culture website Venus Patrol (read more about that site in my story, “Orbiting Game Culture”), who will have an interactive dance experience called the Dancingularity. More details when you show up.