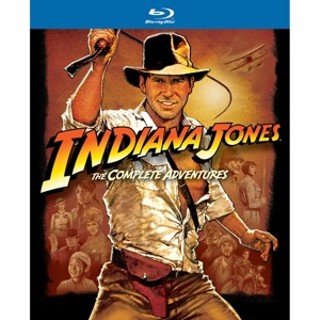 Seeing how the sausage gets made doesn't diminish the magic packaged in the new Blu-ray collection Indiana Jones: The Complete Adventures (Paramount, $99.98).

But be forewarned: Most of the extras on this five-disc set are repurposed from older releases, including short doc “The Melting Face!" (exclamation point theirs, but we would’ve added it anyway). That featurette details how SFX whizzes turned Major Toht’s head into molten goo at the climax of Raiders of the Lost Ark; it then re-creates the laborious process step by step for the viewer, to predictably nifty results.

Behind-the-scenes material accompanies every film, from series kickoff Raiders (which is currently enjoying a 25th-anniversary theatrical re-release) to the more morbid Temple of Doom (story creator and producer George Lucas admits his impending divorce had something to do with the darker bent) to cheeky The Last Crusade and finally to the lesser Kingdom of the Skull, set in the Fifties and – in intent, at least – an homage to that era’s alien B movies, much in the way the earlier films riffed on Thirties matinee adventure serials. Frustratingly not included are any director commentaries.

A recurring point of interest in the extras? All those swarms. There’s director Steven Spielberg, wading through 2,000 snakes on the Raiders set and estimating they need about 5,000 more to do the job right. Kate Capshaw – who laments getting dinged by feminists for her portrayal of the super-screechy Willie – admitting that she was high as a kite on anti-anxiety pills when she shot Temple’s bug infestation scene. And Harrison Ford cuddling up to a rat, one of the thousands bred specifically for The Last Crusade to ensure they were disease-free.

The collection’s standout is a new two-part feature, On Set With Raiders of the Lost Ark, chock full of location footage, outtakes, and deleted scenes. (Get a load of a still-young Harrison Ford bemoaning that “I’m not quite getting the scripts that the top ten get.”) It’s fascinating stuff, watching Spielberg in action, and there’s something rather magical about watching these big kids at play. The biggest surprise? We get to eyeball the elaborate choreography originally planned for Indy versus the swordsman in the Cairo marketplace, before Harrison Ford’s dysentery forced a day-of rewrite – you know, when Junior brings a gun to a scimitar fight. 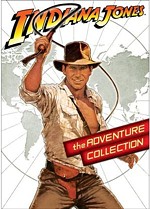