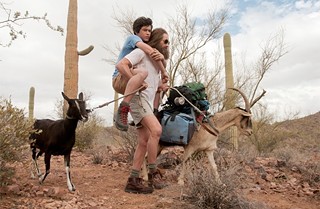 Graham Phillips (on piggyback) and David Duchovny in 'Goats'

Adapted by Mark Poirier from his 2001 novel, Goats longs to be a pointed statement about the strung-out state of the modern American family, which, apparently, involves lots of parental acrimony, wise-beyond-their-years offpspring, and a naked David Duchovny as a cannabis-happy, goat-loving, desert sage.

Hey, I'm single, so this could be entirely accurate insofar as I know, but despite a brace of strong, emotional performances from everyone involved (including the goats, I hasten to add), this is essentially another well-intentioned coming-of-age story in which not a whole lot happens.

Fifteen-year-old Ellis (played by The Good Wife's Graham Phillips) is both the literal and figurative heart of the story, which is initially set in the holistic, solipsistic wasteland that passes for exurban Tucson. His parents are separated, and his only real father figure is Duchovny's bearded Goat Man, aka Javier, who regularly takes the lad on treks through the desert while dispensing odd bits of pseudo-wisdom and reefer.

Ellis' mother Wendy (Vera Farmiga) is a full-blown New-Ager, hellbent on bettering herself through whichever spiritual fad might enlighten her the quickest, while Ellis' estranged father, Frank (Ty Burrell), is the polar opposite: a Gates Preparatory Academy graduate and all that that implies. The Gates Academy – that name just lands with a thud, doesn't it? – is also Ellis' current school, and while he spends much of the film musing on the juvenile antics of the adults around him, he's hardly the second coming of Holden Caulfield himself.

Goats (Image Entertainment, Blu-ray: $29.97, DVD: $27.97) is director Christopher Neil's debut feature, and while I can see what he was attempting to do with this tale of youth-in-nonrevolt, the whole of it falls flat and fails to make much of an impression, good or bad. Admittedly, it's amusing to see the once-upon-a-time Agent Mulder sporting the Wild Man of Navidad look, but that's about all I can say to recommend this otherwise generically quirky story.

Absolutely Fabulous: 20th Anniversary Specials (BBC Warner, $24.98): Jennifer Saunders and Joanna Lumley reprise their roles as the ever-soused Edina Monsoon and Patsy Stone in three specials, including one set at the London 2012 Olympics.