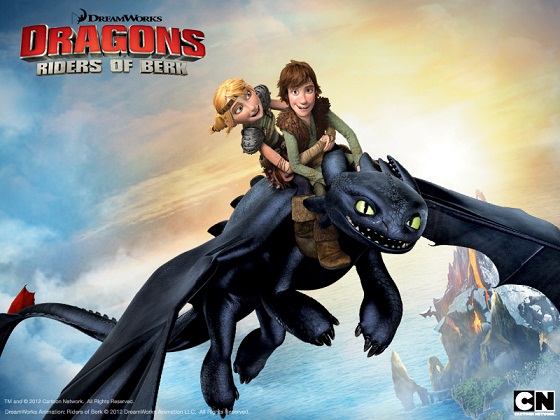 I'll admit to being a sucker for How to Train Your Dragon. Maybe it's being from that blasted barrens of the old Norse lands, but Dreamworks' firebreathing tale of axes and beasties stirs the Viking in me. And so the animated spinoff Dragons: Riders of Berk relights that fire.

Funny to think that Dreamworks was written off as Disney's poorer, idea-stealing cousin (must we mention how much Antz looked like A Bug's Life? Or the Shark Tale/Finding Nemo coincidences? Madagascar and The Wild? No? Moving on.) But they certainly beat the House of Mouse to the North Sea-sprayed punch with 2010's Dragon. Based loosely (veerrrry loosely) on Cressida Cowell's series of children's books, the tale of Vikings coming to terms with their leather-winged, fire-spewing adversaries balanced broad laughs with a bittersweet learning curve. The hero, Hiccup, may save the day with his dragon Toothless, but it costs him his leg.

Much like Disney, Dreamworks loves its TV spin-offs from successful animation. Madagascar dodged the 'further adventures' bullet by putting The Penguins of Madagascar in the spotlight, while Kung Fu Panda spawned the lighthearted Kung Fu Panda: Legends of Awesomeness. There's even a Monsters Vs. Aliens show threatened for 2013, but Dragons is becoming their real money-maker franchise. Aside from pulling in over half a billion dollars globally, it's also spawned a Walking With Dinosaurs -style arena show, a confirmed duo of sequels, and now the TV show.

The first two episodes debut tonight, Aug. 4, on the increasingly CG-friendly Cartoon Network: So, obviously, they sent episode three, Animal House, out for critics. Sure, the animation is not quite as fully rendered as the film, but the quality drop-off is a lot less than what happened with Panda. It does pull a big coup by keeping most of the front-line vocal talent: Jay Baruchel is back as Hiccup, and gets to verbally spar again with America Ferrera as the lanky tom boy Astrid. And if that's not the dulcet tones of Christopher Mintz-Plasse as hapless Fishlegs, then I'll eat a historically inaccurate horned helmet.

The episode puts the village of Berk in the path of a snow storm. Unfortunately, the dragons and the villagers' livestock are not on best terms, and need to be able to get along before they hunker down for the coldest season. Yes, it's a pretty typical 'everyone can get along' story line, but they are the mainstay of kid/tween animation. There's also just enough adult-friendly/vocabulary-extending humor to keep the parents on board ("We're in the middle of Winter," Hiccup comments with an eye to the overcast forecast. "Devastating Winter isn't due for another month.")

It's a lighthearted intro, but Cartoon Network is already threatening that the show will take a darker turn. That's not surprising, considering the mounting bodycount of Star Wars: The Clone Wars has given them a ratings winner. Now no-one is expecting Sith witches and assassinations, but this is the leg-severing franchise, after all. The film pretty much abandoned Cowell's franchise, but with Mark Hamill confirmed as the voice of the series main antagonist Alvin the Treacherous, then it's not impossible that traces of How to Speak Dragonese may start to show their glinty teeth.