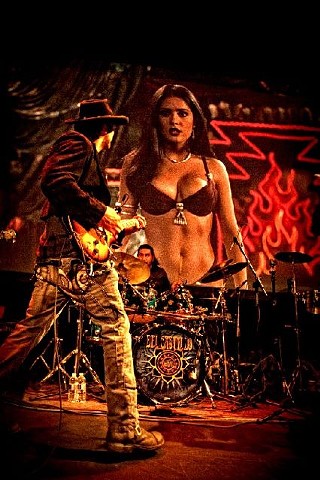 It was 20 years ago this summer that Robert Rodriguez filmed El Mariachi. To celebrate the occasion, the Austin Film Society and El Rey Network threw a little party down at the Paramount Theatre last Thursday night. It was one of those special nights in Austin.

Rodriguez was on hand to present a new print of El Mariachi, along with his stars and members of the crew. Born showman that he is, however, Rodriguez was not content to leave the program at that: He supplemented this screening of his first released feature film with some crazy, spectacular pre-show and post-show entertainment.

A film Rodriguez made at the age of 16 showed publicly for the first time prior to the unspooling of El Mariachi. The title of the short film, “Ismael Jones and the Eyes of the Devil,” barely disguises its heavy Indiana Jones and the Temple of Doom influence – as Rodriguez was the first to remark, pointing out that Spielberg’s film had just been out that summer – so I’m guessing, “Ismael Jones” dates to about 1984. The character is played by RR’s high school buddy Carlos Gallardo, who would go on to star as the title character in El Mariachi. If the title weren’t enough to point one toward the influence, Ismael Jones’ fedora and whip coiled around his shoulder would be a dead giveaway.

Made in Cuidad Acuña, Mexico – using as a location a ranch owned by Gallardo’s uncle, which would also go on to appear in El Mariachi – “Ismael Jones” is filmed in the same fast, brash, and practical style that Rodriguez uses today. The filmmaker joked from the stage that he is making the same movie he made as when he was 16, though provided several illustrative examples of things he learned while make it: how to shoot fast and use cutaways when the action doesn’t match or goes out of focus, how to find “$2 solutions” to technical obstacles, how to analyze your assets and incorporate them into the film – in this case, the ranch and a pit bull; in El Mariachi, a bus, a bar, and a turtle. A portion was missing from the midsection of “Ismael Jones and the Eyes of the Devil,” and the film was no more than 10-15 minutes in length. Nevertheless, the story of an Hispanic adventurer who rescues the girl and saves the day is full of sophisticated shots and camera movement. It is as much an antecedent of RR’s action filmmaking as RR’s student award-winning short, “Bedheads,” is the template for RR’s family-friendly features.

El Mariachi followed "Ismael Jones" and played to an audience of adults of all ages: Some came out to see it on the screen just as they had done 19 years ago (the film wasn’t released until 1993); some had only seen it on home-theatre screens and wanted to help celebrate it on the big, Paramount screen for its enduring inspiration and landmark place in the history of Austin filmmaking; others were seeing it for the first time and afterward were bearing an exhilarated grin that reminded me of the expression I had after seeing the film for the first time. The Chronicle had already been around for more than 11 years by 1993. (In fact this is a complete aside, but The Austin Chronicle celebrates its 31st anniversary tomorrow – September 4 – and I’m exploiting this opportunity to say I could not be more proud.) Marc Savlov reviewed El Mariachi for us on February 26, 1993 and his piece is linked here. Savlov also profiled Rodriguez on the eve of this event in our August 24 issue, in case you missed it: “A Career Hooligan Looks Back But Mostly Forward.” At the end of that story, we added this link to a pdf of a diary Rodriguez kept for us when El Mariachi played at Sundance and won the Audience Award. It appeared in our February 12, 1993 issue and is called “Sundancing As Fast as I Can.” (Scroll to the bottom of the page to find the pdf link.) The subhead of the piece was "Rebel Without a Crew," the title of RR’s how-to filmmaking book that came out in 1995.

Following the show, Rodriguez played on the Paramount stage with his band, Chingón, with Del Castillo. While they played the Latino-inspired music from his movies, the accompanying sequences from the movies played on the screen behind them. The image that I used at the beginning of this piece captures a sense of this amazing experience: RR conjuring the spectacular Salma Hayek in From Dusk Till Dawn with his guitar. (I borrowed the image from a tweet RR sent out, but if you’re the photographer, shoot me a note so we can give you a proper photo credit. We know RR likes to do everything himself, but in the picture both his hands are on the guitar so we know he couldn’t have taken this himself unless he rigged up some kind of shutter delay with one of his ingenious $2 solutions.)

Robert Rodriguez was in his multitalented glory last Thursday night: a perfect host, giving to the audience and reflecting the recognition back on his chosen home town of Austin. I was reminded of RR’s influence on creative young people as I returned to my car. While in the parking-garage elevator, a near-teen leaned back against the wall and said to his mom: “Pinch me, and tell me that really just happened.” Mom explained to me that her son had just seen his idol, Robert Rodriguez.