ATX Games Up for Steam Greenlight

Winners get backing of web behemoth 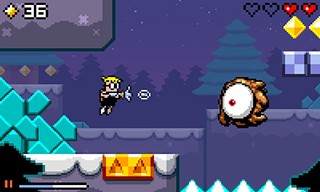 Mutant Mudds: Are you looking at me?

PC gamers already know about Steam, but for the rest of you, it's pretty much the AppStore for video games. Unlike the AppStore, Steam cherry picks the games featured on the site, so indies sometimes find it difficult to get picked up or noticed there. Now, with the Greenlight contest, the decision making is up to the public.

There have been debates about having the public vet games, but the developers themselves are engaging their social networks for votes knowing that a position on the site means exposure. If you have a Steam account (it's free) you can upvote or downvote a game. The downvoting option seems especially questionable. It's the equivalent of a "dislike" button on Facebook and is bound to be misused. All in all the whole voting system has a Wild West vibe to it, but helping a few local can't hurt, so vote and spread the word if you particularly like one. Here's a quick breakdown of your ATX options. (Click on the titles to go to the voting page for that game.)

Super Ubi Land
If the PC version is anything like the iOS version called Up Up Ubi, I think the game's controls will improve with the move to the bigger screen. Made by Notion Games the game has charming art design, surprising difficulty, and arcade style addictiveness.

Mutant Mudds
The folks at Renegade Kid have been making stellar games for Nintendo's handheld systems for a while now and Mutant Mudds is no exception. The platformer has been on Nintendo's eShop for a while, but that can often seem like no man's land without a promotional push from Nintendo itself. Renegade Kid released the game on PC just a few days ago. If you don't want to buy the game but still want to help out, a Greenlight vote might be just the thing.

Waking Mars
The iPhone/iPad sensation was released to great reviews at the beginning of this year and got a boost from Mars enthusiasts following the Curiosity rover landing. Read more about the game with a few words from a member of the Tiger Style development team in this previous blog post. When you're done reading that (and only then) you should go and vote.

GUTS
Honestly, the small team at Big Men Games probably wants your money for their Kickstarter campaign more than a vote of Steam, but put they'll take your vote or your money (or both). One team member helped ship Diablo III and the game certainly takes some cues from that mammoth title. Check out their pitch and see if it moves you.

The Real Texas
This one wasn't developed locally, but I couldn't resist including it because the execution is entertaining and fun. Don't let the name fool you though, this is Bizarro Texas if it's anything.