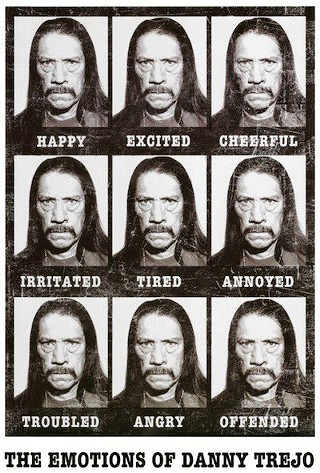 "The reason I enjoy working with Robert Rodriguez is because he likes to play." So says Meredith Johns of Hawgfly Productions, Rodriguez's favored, Austin-based special makeup effects outfit that brings the gore galore.

"It's a little stressful sometimes because you don't always know what he wants until, well, five minutes before he wants it. But apparently I'm masochistic," she adds, "because I really enjoy that. It's like, okay, what do you need? Six heads? Okay!"

Hawgfly, which has worked on both of Rodriguez's forays into edged weaponry and rollicking, grindhouse-y ultra-violence -- they memorably crafted the ropy length of human viscera that Danny Trejo's character used to grand effect in the original film -- had an even bigger job on Machete Kills.

Working with a smaller budget and a shorter schedule, Johns and her assistants found themselved slicing whole bodies in half, crafting William Sadler's severed arm, and providing a veritable bushel of decapitations, exsanguinations, and, who knows, maybe even another defenestration?

"I actually worked under KNB as well," Johns explains. "They would ship things over and I'd use their stuff combined with my stuff. It was nice to be able to call them and say, 'Hey, I need a body tomorrow!' That's the way it works, though. The running joke with Robert's movie is 'Have everything ready all the time and then we might use it.' If you don't have it ready, then you're screwed. We had this collection of heads that we'd just travel around with. We were throwing them around and playing catch with them that weekend. That's pretty much a Robert Rodriguez film in a nutshell."