'Hit & Run' stars would hide out in Austin 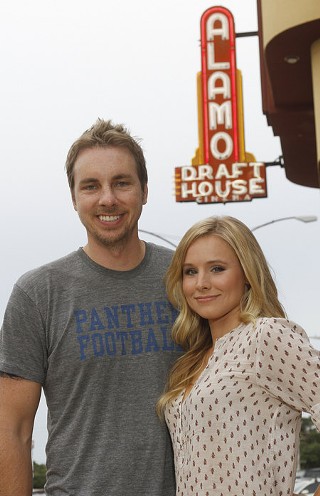 Sloth enthusiasts/insanely cute couple Dax Shepard and Kristen Bell – seriously, they’re like a robust sneeze shy of gratingly adorable (grating only in that we envy their simpatico-ness and facial symmetry) – did an interview with NY Mag's Vulture blog and name-checked Austin as witness protection paradise.

The pair are currently on a promotional tear, talking up about their new film Hit & Run, which Shepard co-directed, wrote, and stars in with Bell, his fiancée. We’ll happily sound the trumpets for both of them, whose talents have long gone undersung. (Have you still not watched NBC's Parenthood? Because Shepard is killing it as lovable fuckup Crosby. And Bell forevermore holds our heart in her hands for her snap-crackle-pop Veronica Mars and when-is-Hollywood-gonna-figure-out-what-to-do-with-her-huh?.)

Apparently, both of ‘em got tired of Hollywood, so they made a movie on their own, on the cheap and out of love, about a snitch who ditches witness protection to drive the woman he loves to a job interview. (The Chronicle’s Marc Savlov called Hit & Run “a bit of a mess, frankly, but as in nearly all cinematic road-ragers, getting there is way more than half the fun.”)

They sneaked the film early at the Alamo Drafthouse in early August, and now they’re on a full-court publicity press (I dare you to hear them on last week’s episode of Wait Wait... Don’t Tell Me! and not wish they weren’t on your speed-dial). Yesterday, they chatted up New York Magazine’s Vulture blog and, riffing off the film’s plot, wondered aloud about their perfect hideaway. Turns out they both dig Austin. See the salient excerpt below:

If you had to go into witness protection, what would you pick as your new identities?
Bell: I would be a baker in Jackson Hole, Wyoming.
Shepard: And I would be in Austin, Texas. But I would have to go with her to Jackson Hole, because we have to be together, in this fantasy.
Bell: I would go to Austin.
Shepard: Okay, we can be in either Austin or Jackson Hole. And you'll be a baker, and I want to mow. Some of my favorite memories are of riding lawn mowers, so I want to mow a cemetery or something. Just be out there for hours, daydreaming, cutting the lawn.

Gaw, even their witness protection fantasies are adorable.