Shooting the Breeze with Speed Levitch

The star of Rick Linklater's 'Up to Speed' speaks

Recently, Richard Linklater debuted his new Hulu web series Up to Speed, a hyper-informative tour of the country's great cities. With professional tour guide/eccentric/urban gadfly Timothy "Speed" Levitch as the host, this is probably the first example of "must see web TV" out there right now.

If you're not familiar with the peripatetic Mr. Levitch, run, don't walk, to your nearest independent video outlet and rent Bennett Miller's fantastic 1998 documentary The Cruise, which will fill in all you need to know about Levitch's wholly unique outlook on his life, his city – New York, baby – and the cornucopia of manic minutiae that is his waking life. (He also had a role in Linklater's 2001 film of same name.)

Up to Speed, which debuts a new episode every Thursday, isn't your average history-oriented travelogue, of course. It's a riot of live-action, animation, and a trippy, stream-of-consciousness ramble that goes from New York City to San Francisco and pretty much everywhere in between. Too cool.

We rang Speed up the other day and asked him about the series, his current whereabouts, and why…..

Austin Chronicle: Up to Speed kind of reminds us of an Yank version of Michael Palin's various globe-hopping sojourns (Pole to Pole, Around the World in 80 Days) but more intimate, and filtered through your singular way of seeing the world around you.

Speed Levitch: I love that series. The conversation the eventually became Up to Speed actually started at South By Southwest. Rick and I were walking to the Me and Orson Welles screening and I told him I thought we should put together a pilot of some sort. Originally we were thinking we were going to call it 'Magical History Tour' – that was his idea for the title. And so that's what we did. We went to New York, he funded it, and what we'd do is just go out and shoot in between his meetings. Totally RL-style, you know? Eventually we cut together a pilot that was kind of a primordial version of the current series and it's continued to evolve from there.

AC: What's been your favorite city to wax poetic on thus far?

Speed Levitch: All the episodes, of course, are my children so I love them all. But if I have to be put in a Sophie's Choice situation, I do love the Virginia episode. To me, it's a specific catharsis because I'm literally rocking out with the very material I found so boring in tenth grade history class. It's like alchemy for your boredom. When you can take stuff that made you bored and rock with it, it feels good.

AC: I bet this sort of show would actually fit into the modern classroom really well, you know? Kids would probably find your persona hilarious – in a good way – and might actually pay attention and learn something from Up to Speed. You should look into that!

Speed Levitch: That's a great idea! We should brainstorm on that. Speaking from experience, if I had seen this in tenth grade, that would have helped me out a lot.

AC: Apart from New York City, which is your hometown, how did you come by all these wild historical anecdotes and deep-down knowledge of the other places you visit in the series?

Speed Levitch: For the most part it was just accumulated knowledge from my travels. Many of the monuments that are featured in the series are old friends of mine, you know, and I've been chatting with them for years.

AC: Wherever you end up on the map, you're always at home. You immediately form these bonds with what are, technically, inanimate objects. Have you always been that way? 'Cause we're not and we totally envy that ability.

READ MORE
More Up to Speed 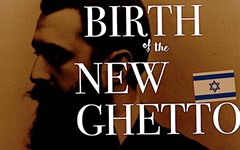