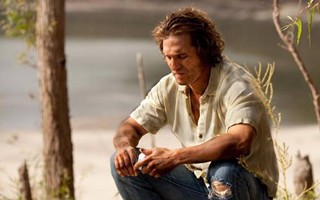 Lionsgate and Roadside Attractions are close to closing a deal to distribute Mud, which debuted at Cannes in May. The drama stars Matthew McConaughey as a fugitive in rural Arkansas who teams up with a pair of boys; Reese Witherspoon, Michael Shannon, and Sam Shepard also star. Nichols already has two stunners under his belt Shotgun Stories and Take Shelter; he's reportedly now at work on a new film, The Boy Who Played With Fusion, an adaptation of a Popular Science article about a teenager who became "the youngest individual on Earth to achieve nuclear fusion." So… we're guessing not a romantic comedy, then?

From the vanguard of Austin film to the old guard: Robert Rodriguez's knockout first feature El Mariachi turns 20 this year – pause to reflect on your own mortality here – and to celebrate, the Austin Film Society, AMD, and El Rey Network are throwing a big ole bash on Thursday, Aug. 30 at the Paramount. On the docket: A 35mm print of the film; the debut of Rodriguez's early short "Ismael Jones and the Eyes of the Devil," which he made at the wee age of 16 with El Mariachi star Carlos Gallardo; a Q&A with Rodriguez, and a performance by the filmmaker with his band Chingón as they play song selections from the Rodriguez oeuvre set to corresponding clips. Tickets are on sale now at the Paramount box office, and keep your eyes on the Screens section for an upcoming interview with Rodriguez.

Austin filmmaker David Fabelo wrote in to say that his short film "Do Over" was recently awarded Best Comedy at the Iowa Film Festival. The short, which was co-written with Taylor Allen, produced by Andrew Logan, and shot by Ricardo Diaz, is bopping all over the place this summer, with upcoming screenings at Cinesol Film Festival in the Rio Grande Valley, the Dallas Video Festival, the Atlanta Shortsfest, and the LA Shortsfest.

Dr. Ian Hancock, University of Texas professor and director of the Romani Archives and Documentation Center, is calling for the National Geographic Channel to immediately halt broadcasting its new reality series called American Gypsies. The press has been less than kind in its estimation of the show, which follows a single, wildly dysfunctional Roma family in New York City (the New York Times called it "deplorable" and "without wit, insight or anything else that might distinguish 'American Gypsies' from shows with 'Housewives' or 'Jersey' in the title").

A press release put out this week by the organization Rromani Zor laid out its case against the show:

"[T]he series title and tagline suggest to viewers this dysfunctional family is representative of all “gypsy” Americans. The series tagline — "You don’t know Gypsy” — not only indicates this show is meant to be a broad ethnic portrait, but it’s deeply offensive too: “Roma” is what community members prefer to be called because “gypsy” is considered a serious insult. (Just imagine the public outrage if National Geographic ever produced a TV series called American Niggers, or American Kikes, or American Wops. Now reflect on the media’s silence about American Gypsies.)"

The press release also quoted Dr. Hancock as saying, “It's an abomination. … Our people have a long and fascinating history, but National Geographic slanders us with old and very dangerous stereotypes: the mysterious rogue; the dark, treacherous gypsy; the genetic criminal. … [The show] has set the cause of Romanis back decades.”

Hancock and members of Rromani Zor have asked that National Geographic cease broadcast, never again distribute the show, and issue a public apology to the Romani people. Rromani Zor's website also has a petition link to protest American Gypsies and TLC's reality show My Big Fat Gypsy Wedding. More as this develops.

Something you want to share? Find us at filmflam@austinchronicle.com.