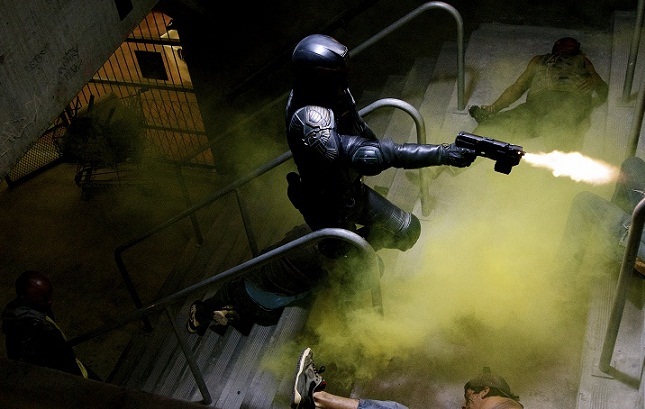 The helmet stays on: Karl Urban stars as Dredd in 'Dredd 3D', blasting its way in Fantastic Fest 2012 (Photo by Ilze Kitshoff)

Fantastic Fest could have just dropped Frankenweenie on us and we would have been stoked: But now they've sent their first wave of titles crashing over us, including a gala premiere of the long-awaited Dredd 3D.

The local celebration of all things cinematic and odd already snagged the world premiere of Tim Burton's long-awaited feature length adaptation of his freshman short for Disney. Now he'll have Dredd 3D to match muscle. Word is that the new version of the classic UK anti-hero comic Judge Dredd wipes away the bad taste from Sylvester Stallone's mockery. Star Karl Urban is no stranger to FF, since he turned up for a fun Q&A back in 2010 for Red. Seriously, if we don't have a Dredd "No talking in the Drafthouse" PSA, we'll be missing out.

He's not the only FF alum coming back. Japanese freakazoid Noboru Iguchi (Zombie Ass, RoboGeisha) will be serving up some Dead Sushi, Oh Young Doo (Invasion of Alien Bikini) draws his Young Gun in the Time, and French visionary maniac Quentin Dupieux will show us how the world is Wrong.

The Alamo Drafthouse's favorite festival wouldn't be complete without some great archive prints. Last year An American Werewolf in London lead the bloody charge, and this year it's the groundbreaking The Shining. Save your arguments about what it all means until after Room 237, a new documentary plunging into the world of conspiracy theories and weird explorations of the hidden symbolism in Stanley Kubrick's classic.

There's even word of another festival within the festival. Last year it was Grady Hendrix presenting the best of obscure Asia with Movies on Fire: This time around former Drafthouse programmer Kier-la Janisse takes us into The House of Psychotic Women, with poltersexual The Entity, mad monkey family drama The Mafu Cage, and none other than Elizabeth Taylor in Secret Ceremony.

Dredd 3D (2012)
Gala Premiere
D: Pete Travis, USA, 98 minutes
The future America is an irradiated waste land. The only force of order lies with the urban cops called “Judges” who possess the combined powers of judge, jury and instant executioner. Known and feared throughout the city, Dredd (Karl Urban) is the ultimate Judge, challenged with ridding the city of its latest scourge

The Entity (1982)
Repertory Screening as part of the House of Psychotic Women series
D: Sidney J. Furie, 125min
In this controversial film based on a true story, director Furie explores the domestically-abused-woman-as-masochist stereotype by veiling it as a supernatural horror film.

Errors of the Human Body (2012)
US Premiere
D: Eron Sheean, 101min
Plagued by the memory of the infant son he could not save, geneticist Geoff Burton plunges into a web of intrigue, jealousy and lies in this icily precise thriller.

Everybody in Our Family (2011)
US Premiere
D: Radu Jude, 107min A simple domestic dispute becomes an explosive examination of stress in this powerful and unsettling Romanian drama.

I Declare War (2012)
Regional Premiere
D: Jason Lapeyre and Robert Wilson, 91min
A group of exceptionally creative teens gets sucked into their own private Lord of the Flies scenario when an after-school game of "war" turns into a test of loyalty, strategy and friendship.

The King of Pigs (2011)
Texas Premiere
D: Yeun Sang-Ho, 97min
The King of Pigs is an emotionally punishing animated indie film about a group of friends whose brutal childhoods continue to haunt them as adults.

Le Memoria Del Muerto (2012)
US Premiere
D: Valentín Javier Diment, 89min
Alicia undertakes a bizarre cult ritual to restore her deceased husband to life – a ritual that will see her home and friends visited by the spirits of the dead.

The Mafu Cage (1978) Repertory Screening as part of the House of Psychotic Women series
D: Karen Arthur, 102min
One of the most compelling and uniquely dark films of the psychotic woman subgenre, Karen Arthur’s adaptation of Eric Westphal’s play You and Your Clouds stars Lee Grant as Ellen, an astronomer who lives with her feral sister Cissy (Carol Kane).

Paris by Night (2011)
Texas Premiere
D: Philippe Lefebvre, 100min
Phillipe Lefebvre's Paris by Night is a sleek French cop thriller that follows a pair of vice cops as they patrol the Parisian club scene over the course of a single evening.

Secret Ceremony (1968)
Repertory Screening as part of the House of Psychotic Women series
D: Joseph Losey, 105min
In Losey’s underrated Secret Ceremony, an aging but still glamourous Elizabeth Taylor stars as Leonora, a prostitute grieving over the death of her daughter in a drowning accident.

The Shining (1980)
Repertory Screening
D: Stanley Kubrick, 142min
Stanley Kubrick’s horror masterpiece features an unhinged performance by Jack Nicholson and a setting that drips with menace. Its imagery and characters have permeated all areas of pop culture throughout the decades, yet the film retains all its power to disturb and terrify.

Tower Block (2012)
US Premiere
D: James Nunn and Ronnie Thompson, 87min
The last remaining tenants of a deteriorating, soon-to-be-demolished tower block must band together to survive when a killer with a high-powered sniper rifle starts picking them off through the windows of their flats.