Middle-schoolers learn that gaming is in the details

It's a video-game plot as old as time: a badass unicorn needs to protect Frank the Narwhal while supplying said narwhal with tacos. Why tacos? Because without them Frank gets sassy and impossible to be around. Yup, it's a tried and true game trope. Oh, wait, no it's not. It's brilliant! And fresh from the minds of middle-schoolers attending UT's Game Camp. 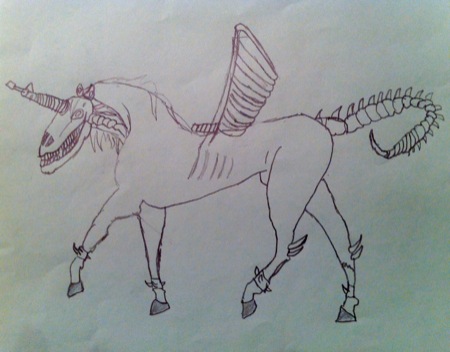 That's one scary unicorn. Is that a gun instead of a horn?
Flipping through the campers' design books (or, in industry parlance, design bibles) it's easy to see how much time the teams spent learning the detail and elements needed to make a complete game. What they haven't been doing is learning to code. Unofficial counselor and local indie game developer George Royer explained the reasoning behind this approach to the students on the last day of camp: "I'm really glad you did the design stuff, because once you learn how to do that you can always pick up the tools. Learning to think what you might do with them is the most important thing, and that's why most games that are made are not good." And honestly what kind of camp would have kids sitting in front of a computer laboriously typing line upon line of dense code? Not a fun one, that's for sure. 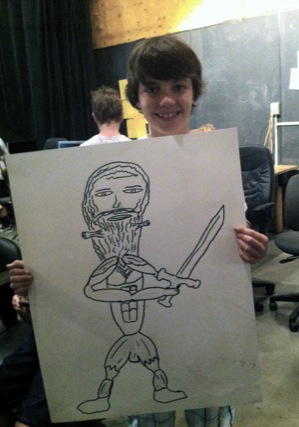 Joe with his rendering of a dwarf. I can appreciate a well-ventilated beard.
What the kids did focus on were the elements of game design, namely character, mechanics, layering, storytelling, and more. The Game Camp head honcho and UT Associate Professor Craig Watkins described it as being "literate in the 21st century."

The days were broken up into sections often starting with a critical analysis of popular titles like Mario Kart and smaller indie fare such as Canabalt and Spelunky. The kids deconstructed the games and discussed how the design succeeded or failed. "We wanted to encourage them to build critical thinking skills not just about games but about other forms of media," Royer explains. 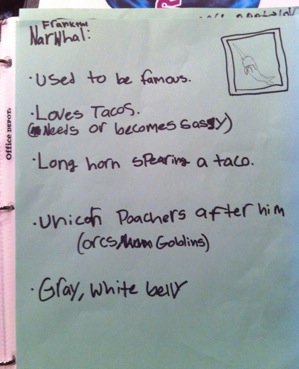 A character description of the vacillatingly sassy narwhal.
They used these same tools to look critically at ads for sugary cereals and treats as part of a larger project creating a working video-game encouraging youngsters to eat healthy. The campers used a program called Sketch Nation that comes preprogrammed with standard game mechanics. The kids used photography and their own drawn creations to populate these worlds. One game is a fever dream brought on by eating too much junk food. Another involves a carrot family living in a house haunted by sugar cubes. The highlight is a game called Jordan Jump that stars Barbara Jordan (!) as a ninja (!!) who uses asparagus and broccoli as power-ups. When asked what the things were coming out of Jordan's character in the game, the designer responded "That's her jetpack." Barbara Jordan with a jetpack. Finally. 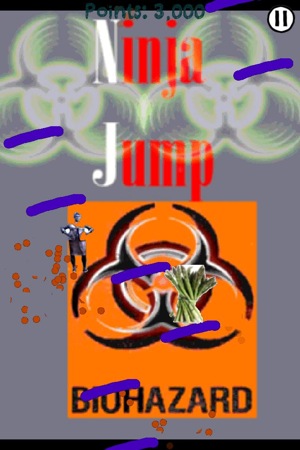 Yup, that's Barbara Jordan, jetpack exhaust and all.
Popular board games like Candyland, Chutes and Laddars, and Uno were "remixed" and generally made more cutthroat by the students. A student described the project as "confusing and challenging" as the realization sunk in that every decision a player could make needed to be considered. The detail involved in making a complete system of rules is one of the hardest lessons for any rookie game maker.

Over the camp's two weeks the small group was broken up into two teams to create stories, characters, and the mechanics for a complete video game. The end results felt much like a pitch to a publisher complete with character renderings, plot synopsis, and even storyboards. The unique creations (like the unicorn with an automatic weapon for a horn) and detailed schematics (including a chart of various spells, their cost, damage, and duration) were impressive, surprisingly original, and well thought out. 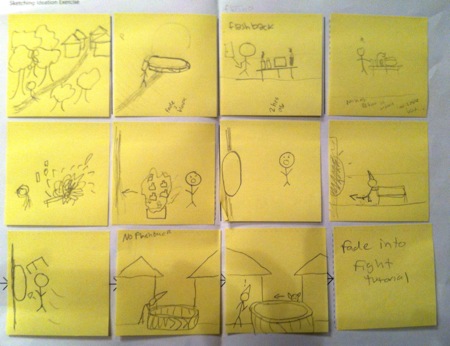 A breakdown of one of the cinematic scenes, on Post-It Notes.
The real success of these design books was that I wanted to see these games completed and play them. I pictured the world and how I would interact with it and longed to do so. I wanted to control a unicorn and keep Frank satiated with tacos while fending off goblins bent on my destruction. And, really, who wouldn't?