And you thought C.H.U.D. was slimy 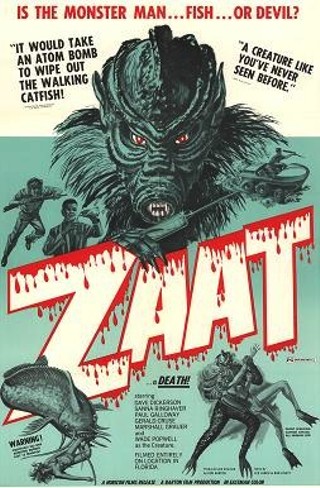 Okay, possibly "classic" isn't the exact right word, but Zaat, restored and remastered after four decades of near-total obscurity is a beautifugly thing to behold. It's garish and wild, and while some of the pacing occasionally mirrors the interminable takes so popular with that other Sunshine State guru of grue (that'd be Herschell Gordon Lewis, natch), Zaat moves at a downright brisk clip when compared to, say, Blood Feast. (And it eventually ended up as comic cannon fodder on one of the more memorable episodes of Mystery Science Theater 3000.)

In his only known role (according to IMDB, at least), seething unknown Marshall Grauer is "mad" Dr. Kurt Leopold, a shambling, greasy-locked icthyologist with an unquenchable thirst for vengeance. Like a sleazier Herbert West, Re-Animator, Doc Leopold nurses a grudge against those in the established medical community who done him wrong.

Working out of what appears to be an abandoned "laboratory" complete with what can only be described as a hand-drawn "wheel of misfortune," Dr. Leopold charts his progress – 25 years, dammit! – as he attempts to combine his own innate creepazoid charmlessness (and, presumably, DNA) with that of various slimy sea creatures, chief among them the dreaded "walking catfish."

Success comes in the form of the titular man-fish, which recalls Rick Baker's earliest work on the same year's Octaman more than it does Creature from the Black Lagoon. And therein lies Zaat's charm.

Co-writer/creature designer Ron Kivett and DVD curator Ed Tucker will be on hand for tomorrow's Weird Wednesday one-off at the Alamo Ritz, but we managed to reach director Don Barton by phone from his home in Jacksonville, Florida. Here's what he had to say about his sole foray into indie horror way back when.

Austin Chronicle: You were involved in making documentaries and training films at the time, right? How on earth did something as surreal as Zaat come into being?

Don Barton: Ron Kivett, one of our staff members, came up to me one day and said he had an idea for a feature film and why don't we give it a try? I thought, okay, so we talked to a distributor who actually handled the distribution for all the southeastern states. He thought it was a viable idea and so we came up with a treatment and a script with the aim of marketing something that'd be a little bit different than what was already out there. We managed to raise about $50,000 and in the meantime Ron was developing the monster costume.

AC: Which is awesome, by the way.

DB: Thank you. That took a while. It was a basic wetsuit that Ron applied various materials to. This all took place over the course of about a year. We weren't in any hurry because we all had other things to do. When I finally felt we were ready with the script and the costume, we started to do the casting.

AC: Which brings us to one of the great, unsung mad scientists of 1970's drive-in fare, Marshall Grauer. Where did you find this guy and who was he? Zaat is his only screen credit as far as I can tell.

DB: Marshall was an actor at a little theater there in Gainesville and I knew some of his productions. I just thought he was right for that role, and, boy was he ever. Wade Popwell was the monster. He wasn't really an actor but he was a great swimmer and SCUBA diver and ended up being in probably ninety percent of the scenes

AC: What sort of distribution did you get for the initial release?

DB: We had fairly good distribution through the southeastern United States with a company called Clark Distributors. I think we had about 275 showings in the southeast, with fifty percent at drive-ins and the other fifty percent at hardtops. It eventually came out as two different movies with two different names [Blood Waters of Dr. Z being one of them] due to some distribution issues I'd rather not go into here.

AC: What do you think of Zaat now, with 40 years hindsight?

DB: It was a great experience for me because the team we brought together, the actors, Jack McGowan's camera work, George Yarbrough's editing, worked so well together that it was just terrific fun for everyone involved.

AC: I've heard rumors of a sequel. Any truth to that?

DB: Yes, there's going to be a sequel. I have a 21-page treatment and I love it. My wife even likes it! I'm calling it a "docu/comedic/action/satire/spoof." But being an idependent and with so much competition in the marketplace, you know, we can't do this for nothing. We're talking about a few million dollars to pull this off, but if we can get the right people involved, we're going to go ahead and do it. It's going to be kind of a G-rated, teenage movie.

AC: One final question: what have you been up to in the four decades since your first and, as yet, only monster movie took the south by storm? You make the experience of creating Zaat sound like a such a blast, so why didn't you ever get behind the camera again?

DB: Actually, I ended up making a career change while my sons came into the documentary business I had founded and ended up purchasing it. I became involved in marketing with the Seton health care chain out of Houston and the St. Vincent's health care system. I'm since retired from all that. The other side of me is a kind of spiritual side and my wife and I developed a non-profit called Holy Spirit Communications the purpose of which is to pray, through the Holy Spirit, for world peace. And that's how I've been spending a lot of my retirement, so to speak.