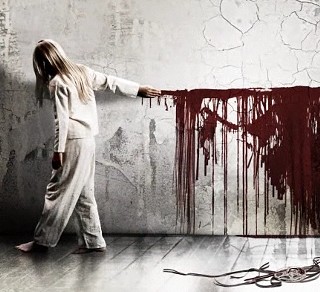 Ya gotta give props to C. Robert Cargill aka Ain't it Cool News regular Massawyrm. He's made that rare jump from writing about films to writing films with upcoming shocker Sinister. Even bigger news: The film with local links is getting some international buzz.

Co-scripted with Scott Derrickson (director of The Exorcism of Emily Rose and writer of the upcoming adaptation of Fantastic Fest fave Zwart Water), Sinister made its debut as one of this year's SXSW secret screenings. The R-rated supernatural thriller has Ethan Hawke finding something unpleasant in the attic of his new family home (did we mention the previous residents had all been gruesomely murdered?) Our own Marc Savlov was lucky enough to catch its SX outing, and gave it a severed thumbs-up. After the screening, he wrote, "Maybe it was the lack of sleep, maybe it was the damp, but we were seriously spooked walking the three blocks back to our car in the dead of night."

There's been a bit of online fuss recently after the Guardian reviewed the trailer. However, the UK has made up for that moment of snark by adding the film to the prestigious Film 4 Fright Fest, where it will receive its European debut. US fans just have to wait until Oct. 5, when the shocker is unleashed stateside.