From the Vaults: Nada Lado In Savages, the characters on all sides of the movie's hyperadrenalized drug war, fling the title epithet toward members of the opposing camp: "Savages," they sneer. And in each instance, the pronouncement has a ring of truth. Each character in this movie behaves badly, but none more convincingly than Benicio del Toro's Lado.

Del Toro has always had a way of throwing himself into his roles, creating indelible characters that subsume the actor within. Whether he's playing the mumble-mouthed Fenster in The Usual Suspects, Raoul Duke's gonzo Samoan co-conspirator in Fear and Loathing in Las Vegas, or the revolutionary leader and romanticized icon Che Guevara, del Toro gets under the skin of these guys and walks around in their bodies.

He does no less in Oliver Stone's new movie Savages. As Lado, the chief enforcer for the drug cartel run by Salma Hayek's Elena, del Toro creates a character so despicable and repulsive that you're afraid to avert your eyes for a second, for fear of the menace he can create in an instant. You'd wish to erase Lado from your memory were not the experience of watching him so perversely enjoyable.

So, on the occasion of this weekend's release of Savages, and last weekend's release of Magic Mike, which is directed by Che: Part One and Part Two mastermind Steven Soderbergh, we're looking back at "Becoming Che," the 2009 interview the Chronicle conducted with Benicio del Toro. Our reviews to the aforementioned films are all linked above, too. 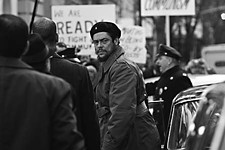 Becoming Che
Benicio Del Toro on the method, the madness, and the merchandising