Tonight! Ed Wood David 'The Rock' Nelson at The Ritz

Chicagoan filmmaker, outsider artist, auteur and so much more 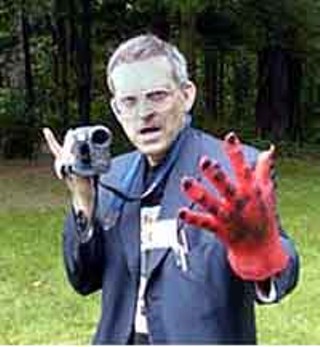 What with the Alamo Drafthouse's plan for world domination going full tilt boogie of late, longtime fans – we mean those who can recall the numerical address of the original Alamo – are understandably anxious that the original 'Mo mandate might get a tad … diluted. Fear not: tonight, at the Ritz, glorious chaos reigns and monsters rule!

In a 100% pure, psychotronically sublime, supercool event that distills the essence of everything we love about our fave groovie movie palace, Alamo programmer Zack Carlson has invited David "The Rock" Nelson – ex-Marine, ex-prizefighter, and full-time freakazoid filmmaker – to screen some of his improbably charming body of work for lucky, lucky us.

"They show The Rock's stuff every Halloween on the Chicago public access TV channel," explains Carlson. "I was up there and saw one of his films, Frankenstein Stalks, where The Rock plays both Dr. Frankenstein and every other character. And at one point he just broke out of character and started talking about how delicious this Ding Dong that he was eating was. He basically talked about Hostess products for 12 minutes in the middle of this movie."

"I'd never seen a movie like it," Carlson enthuses, "but it wasn't like 'ha-ha, this is a piece of shit,' it was more like this guy was totally doing this out of his own excitement and enjoyment of, not just monsters, but everything. I'd never really seen somebody who, as an adult especially, is just so happy to be alive and walking the earth. Everything in his life is, like, electrifying, and that totally translates through to the viewer. That's really unique. I've never seen anybody else who can really do that."

Sounds like a classic old-school Alamo evening if ever there was one. We're certain we'll have more to say about The Rock and his Ed Wood-esque oeuvre after the show, so check back tomorrow. In the meantime, tickets are going fast for the 10 pm screening/event/joygasm. You can buy 'em here.