There's nothing rotten in Denmark, or drought-plagued Central Texas, that can't be remedied with a good stiff paddle, a bunch of tipsy film critics and filmmakers, a flotilla of dodgy canoes, and the bucolic Guadalupe River. Heck, we barely got to unsheathe our brand-new Browning® throwing knives, but boy, were those Live Oak rope swings some serious fun!

We are, of course, referring to yesterday's Ultimate Klown Experience Rolling Roadshow on the aforementioned body of (mostly) water. Celebrating the impending arrival of Drafthouse Films newest acquisition, co-stars Frank Hvam and Casper Christensen, along with producer Louise Vesth (Melancholia) and 100-plus audience members and assorted hangers-on, headed out to the Guadalupe River Canoe Livery in Spring Branch, Texas and succeeded in remaining afloat (if not entirely upright).

Following a lazy drowse down the river, punctuated only by the occasional capsized canoe and/or intentional dive into the cool, clear waters, the crowd enjoyed – or was horrified by, depending on one's sense of what constitutes acceptable yuks – the considerably warped genius of Klown: The Movie. (A Danish television series preceded this big-screen outing. We haven't seen it, but Tim League assures us it's phenomenally effed up.)

Part buddy movie, part water-based road trip, and featuring a large child with a tiny penis (the surreptitiously excellent Marcuz Jess Petersen), Klown might not play in Peoria, but it's got Drafthouse Films written all over. (It premiered Stateside at Fantastic Fest 2011 and was immediately embraced as "wildly inappropriate," but in a good way.)

And Klown is one of the best non-genre-specific Fantastic Fest offerings in recent memory. Helmed by Mikkel Norgaard and scripted by co-stars Christensen and Hvam, Klown comedically tackles everything from unplanned parenthood to societally entrenched notions of masculinity, responsibility, and, uh, let's just say "tomcatting." Ultimately, it's the story of two not-so-great Danes on a life-changing, loudly desperate foray into the outer limits of their inner trousers and beyond.

For all its unrepentant bad-good taste, Klown's stateside release and R-rating were secured with little difficulty from the MPAA. No cuts at all?

Hvam: "I was very satisfied with our rating in Denmark. You've got to be at least 15-years-old to at least understand what the hell is going on in the movie."

Hey, at least it's not A Serbian Film and everyone survived the wild raging rapids of the Guadalupe in the middle of a Texas summer. Now that's shocking. [Klown opens at the Alamo Drafthouse, on VOD, and in iTunes July 27.] 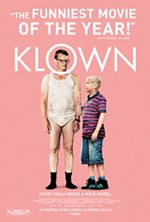 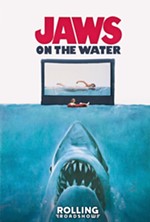