The Week in Gaming Events

You will have to leave the house 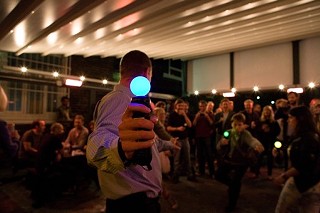 If you don't like your gaming culture mixed with other branches of the arts tree then this might not be the week to venture into the oppressive Austin sun. But, if you like a little classical music, visual arts, or even some dance jams with your video games then here are a couple of upcoming goings-on to keep you entertained.

If you've ever played a Legend of Zelda game and thought, "I like this soundtrack, but wish the Ocarina was replaced by a full orchestra," then hoo-boy are you in luck this weekend. The Long Center hosts The Legend of Zelda: Symphony of the Goddesses as classical musicians tackle jams from a wide spectrum of the series' musical offerings. If you're like me, orchestral reimaginings of video game music often leave me cold. It's probably all the lasers, pyrotechnics, and extras from hair metal bands that organizers of such things deem necessary to keep the attention of ADD gamers that turns me off. If I want to see the Trans-Siberian Orchestra ... well, nevermind, I don't. Anyway, by the sounds of it, this event has toned down the usual arena-rock trappings to focus on the music and the beauty of the game. The show is next Friday, June 22 at 8pm. Get your tickets online.

More immediately, the New Media Art and Sound Summit is taking over Salvage Vanguard Theater all weekend with avant-jazz, experimental films, and other outre offerings. What's this got to do with gaming? Well, on Saturday, June 16, starting at 8pm the Beauty Ballroom will be the satellite NMASS venue for a dance party and gaming extravaganza. Show up early for Johann Sebastian Joust courtesy of the fine folks at Juegos Rancheros. If you don't know what that is you should watch this video and know that playing the game in person is even more fun than it looks. If you want to play something with a slightly more traditional gaming feel try out Hexagon, an absurdly addictive arcade-style game that is easy to get the hang of and difficult to master. Just watching people play it has the ability to hypnotize. The games start at 8pm and people get in free until 9pm. (It's $15 after that.) How's that for a deal? The show really gets started as various forward-thinking DJs show your feet the future as Party Time! Hexcellent! provides imagery to keep you in the mood to party.

READ MORE
More The Legend of Zelda: Symphony of the Goddesses 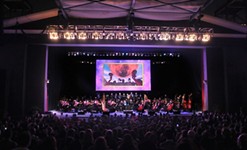