AFS hosts a contest for composer-hopefuls

In conjunction with its upcoming panel on music in film, the Austin Film Society and the Austin Music Foundation are hosting a contest for musicians to score a clip from the upcoming documentary Yakona.

The Music in Film in Music panel, which takes place Wednesday, June 27, will focus on how to better facilitate collaboration between filmmakers and musicians; panelists include documentarian Andrew Shapter (Before the Music Dies), music supervisor Dominique Preyer (Hear-It Clear-It Supervision), and supervising sound editor Tom Hammond (Soundcrafter). The evening will also include a showcase of the best entries in the DIY scoring endeavor. Musicians are encouraged to score a two-minute clip from Yakona, a documentary-in-progress by Paul Collins, Dean Brennan, and Anlo Sepulveda set along the San Marcos River and its headwaters at Spring Lake. Need a fount of inspiration? Yakona's official site describes the project thusly:

"One of the oldest inhabited areas in North America, the springs have seen Mastodons die on its banks, the Native tribes of North America rise and fall, Spanish explorers seek the fountain of youth and modern man build dams, roads and bridges."

You can download the clip at AFS' Vimeo page here. Submission deadline is Monday, June 18, 5pm; further instructions can be found here.

The trailer for Yakona is below, but fair warning: It comes prescored (by Travis Austin), so composer-hopefuls might want to turn the sound down. 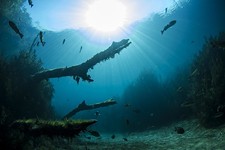 SXSW Daytrip: San Marcos With the 'Yakona' Crew
The filmmakers behind the eco-doc take us to the river