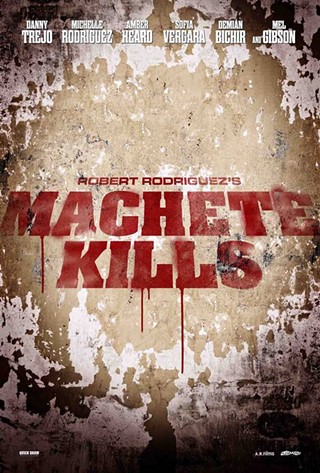 Even though we arrived early-ish, the line snaking its way around Austin Studios' parking lot was, in a word, ginormous. Bikers and punks, film fans and frat rats, pros and (judging from some sketchy prison-esque tattoos we spotted) cons massed like legions of exceedingly amiable, chatty zombies, all waiting for a chance at cinematic immortality. Kinda.

If nothing else, yesterday's open extras call for Robert Rodriguez's upcoming Machete sequel made one thing crystal clear: Austinites love the idea of potentially being a "background actor" in Troublemaker Studios' gleefully gory, Danny Trejo-starring franchise. Hey, you might get red on you!

We've been a background actor on a couple of films in the past, and while there may be plenty of guts in Machete Kills, for the average extra, there's precious little glory. Instead, there's hours of standing around (bring a book/iPad/Nintendo DS!) and being shuffled from one camera set-up to another, tons of background blocking, and hours of tedium relieved only by the occasional chance encounter with that hot grip-guy/girl packing that huge roll of gaffer tape that you've been eyeing all afternoon...such is the lot of the background actor.

Which isn't to imply that being on any Rodriguez film set might be a snooze. Mel Gibson, in town recently to promote his new film Get the Gringo, dropped a coy Q&A hint that he may cameo in the film -- don't forget to bring a recording device! -- and at the very least you'll likely get to watch something explode/someone be gutted/Rodriguez strum his guitar. And, of course, you get paid.

It's not quite like Ricky Gervais' Extras -- quick mindfuck tangent: what must it be like to be an extra on Extras? -- but given the action-to-inaction ratio in Rodriguez's films, it's virtually certain to be a disembowelingly good time. Shooting starts June 14. We'll keep you updated as viscera events develop.