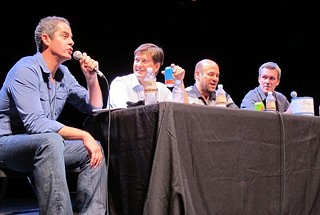 When Bill Lawrence tells you that network television as we know it will be dead within five years, you better believe it.

After all, Lawrence has a legitimate string of successes under his belt: Six years as creator, producer and writer for Spin City, a decade of Scrubs, and now Cougar Town. He was the guy that rehabilitated the careers of Michael J. Fox and Charlie Sheen, and gave Connie Britton (future star of the locally-lensed Friday Night Lights) her big break when he rewrote her to be that show's main love interest. Yet it may well be the Courtney Cox vehicle that best proves his point. Recently dumped by ABC, it was picked up by TBS: As Lawrence told the audience at the ATX Television Festival yesterday, TBS now consistently beats CBS in the ratings.

And would that be a bad thing? After all, the networks have got so twitchy that Cheers – which was consistently dead last in the ratings amongst scripted shows in its first season – would have been canceled after three episodes. Cable has become a much more accepting and experimental medium.

The panel was called Bill Lawrence and Friends, and that's a pretty accurate description: As Lawrence pointed out, the great thing about working in TV is that you get to hire and rehire people that you like working with. That explained why alongside Cougar Town co-creator Kevin Biegel and stars Ian Gomez and Brian Van Holt, Lawrence was also cracking beers on the Stateside stage with two of Scrubs most gloriously deranged characters: Neil Flynn, aka The Janitor, and Robert Maschio, better known as meat head super-surgeon and banana hammock aficionado, The Todd.

And, yes, it had to happen. I high-fived The Todd. And it was good.

If there's one facet of Lawrence's writing style that came to the fore during the panel, it was his ability to write realistic and unapologetic bromances, like Mike and Carter in Spin City, and JD and Turk in Scrubs. He came clean on his real life inspiration: Randall Winston, his long time producing partner and best friend. If you're wondering what he looks like, he was also Leonard, the hook-handed security guard from Scrubs. And if you're wondering why the name sounds familiar, it's because Lawrence borrowed his name for Barry Bostwick's mayor in Spin City. As the man admitted, it's a lot easier than trying to come up with new names for characters all the time, so using people you know is a lot easier.

Side note: The inevitable discussion came up about what The Janitor's real name is. As far as Flynn is concerned, everything is a red herring. So not Dr. Jan Itor, not Tom or Tommy, and definitely not Gwen Mafews. Just The Janitor.

That friendship thing explains one of the great mysteries of Scrubs: Why was Nurse Laverne Roberts killed off in season six, only for actress Aloma Wright to be bought back the next year as Nurse Shirley? Simple, said Lawrence. Everyone thought that show was going to be canceled after season six ("We thought we were going to be canceled ever season," he said) and so this was a great way to give a major character and meaningful and memorable send-off. 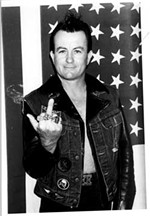