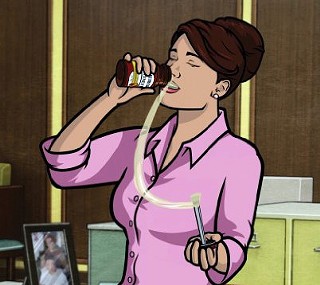 ATX Television Festival guest Judy Greer on Cheryl from FX' 'Archer': "It would be really hard to play her in a live action show, but it would be really fun to do. My parents wouldn't like it."

Judy Greer personifies that actress that you recognize from too many things to name. Her resume is filled with the kind of shows that define 'brilliant but canceled' (Love Monkey, Mad Love, Arrested Development) and critical darling films (The Descendants, Jeff, Who Lives at Home.) But if you like really perverse TV, it's her voice you'll recognize.

Speaking of perverse, she may be the only person enjoying Austin's new burst of suffocating heat. "I like 'vile sweatbox'," she grinned in the ATX Television Festival press room. "I like the humidity and the heat. It makes my skin look really glowy. I mean, my hair looks crazy when it's humid, but the skin is good."

Greer is cramming in a packed weekend for the inaugural festival. Aside from debuting her new character in TBS' Royal Pains at the Stateside tonight, Saturday she'll be taking part in a Love Monkey retrospective, and that's after presenting "El Secuestro," an episode from the brilliantly twisted FX animated spy comedy Archer. Fans will remember it as the episode where we get the greatest insight into Greer's character Cheryl Tunt, the lunatic secretary with a choking fetish. (Oh, yeah, and she's now a recurrent character on a little show called Two and a Half Men.)

Judy Greer: When I signed up to do it in the pilot, I thought, 'Oh, I'm playing a weepie, pining secretary whose just like, in every episode, 'Oh, I love you, Archer, why did you fuck me over?' That'll be fun, because the script is so awesome. But I think I'd have to ask [series creator Adam Reed] that question. We're in season four, but over that first season I was like, 'Wait, whaaaat? Wait a minute. Oh, so I'm mad. Oh, so I'm fucked up. Oh, so I'm totally crazy too.' It was really fun to see her evolve, and I think he and I always had fun recording together. I'm so thankful that it got so crazy and turned so upside down, and how nuts this character is. It's so fun. But I don't know how it evolved. I hope it's because of me and because he thought, 'Oh, Judy can do this fun stuff.' It would be really hard to play her in a live action show, but it would be really fun to do. My parents wouldn't like it.

AC: There's a certain quirkiness to a lot of the parts you've played. Something like Love Monkey, which was a little off the beaten track. When you're looking at scripts, what is it that makes you think, this is the one?

JG: For me it's usually the people involved, especially on a television show. My shows aren't usually successful. They're canceled, or the pilots aren't picked up, but I always look for people who I want to potentially spend five years with, because that's what it comes down to. And the character. Can you maintain this character for years? Is this someone you can leave in your dressing room when you go home at night? So things like Love Monkey felt like such a great fit. That was a tiny bit more grown up of a character than I was at that time, so I got to elevate myself to that level. I learned a lot from playing her, and I loved all the cast members. And then doing something like Mad Love, I was excited about because I'm friends with Sarah Chalke and Jason Biggs is funny, and we all just kind of fell in love. I was hoping to play that character for a long time because she was a little more edgy than I am as a person, so I could explore that side of my personality, but also have fun doing it.

AC: And now two of your longest-lasting parts have been voice-overs: Cheryl on Archer and Wendy Park on the seriously underrated Glenn Martin: DDs for Nick.

JG: It's not for lack of trying, trust me. I want to be on TV. Every year I do a pilot, and I want to be on that great show. I'm not one of those actresses that is like, 'I really want to do movies.' No, I really want to do television. I'm having fuck-off great success doing movies, so I don't know. I just really like the idea of having a steady job and building a character and working with the same people for a long time. Being on TV is fun, because everyone watches TV. Even the people who say, "oh, I never watch TV,' yeah, you totally fucking watch TV. That's a lie. Unless you don't own a television, and I'm not talking about the kind of television where you're like, 'It doesn't have channels, I just watch DVDs in it.'

JG: It counts as having a TV, and don't tell me you're not renting Friday Night Lights on Netflix, or The Wire, or any of the HBO shows. It's still television. Television's awesome.

AC: So how did you get into doing voice-over work for animated shows?

JG: I've always auditioned for commercials, and I've never booked anything. Yet, I should say. But there's a casting director in LA called Linda Lamontagne. She gave me this tiny role on Family Guy and then bought me in several times for Glenn Martin. She was kind of relentless with them, saying 'Use her, use her.' I read for many different roles and then finally they cast me. She bought me back a bunch of times for Family Guy and then, I think because of Glenn Martin, I got the offer for Archer. I was shooting something else in Arizona at the time, and they said, 'Oh, there's a pilot for FX. It's a voiceover thing, you should do it on Friday, you have a day off.' And I read the script and went, 'This is never going to be on the air. It's too awful.' And I mean awful in a good way. So I was like, 'OK.'

It's like a club. It's like a really serious club, and it's really hard to get in, unless you're a giant star for those animated films. It's hard, and I'm not even really great at it. There's such great vocal performers, voice over performers who can change their voices and be a thousand different people and their voices sound so clear and crisp and beautiful. It's a real art form.