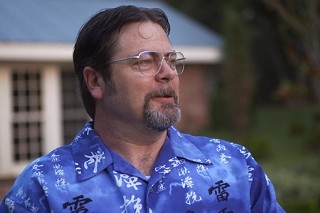 Nick Offerman in 'Somebody Up There Likes Me'

Too broke to go on a summer vacation? We feel your pain. But you can still see the world and even enjoy a spot of time travel – summer of '82, anyone? – with this summer's supersized repertory and microcinema lineup.

Following yesterday's announcement of Blue Starlite Drive-In's new berth at Austin Studios, we heard word from filmmaker Bob Byington that his latest film, Somebody Up There Likes Me, will kick off a new summer series from Cinema East on June 10. The series runs every other Sunday through to Aug. 19; more details on the lineup forthcoming.

But before then, we've got plenty of other series to sink the teeth into. The Austin Film Festival launches a new series May 21 highlighting the Audience Award winners from AFF 2011, including Restive, Ecstasy of Order: The Tetris Masters, Stories From an Undeclared War, and Sironia. And the Show! Presents: Austin Auteurs continues May 22 with Spencer Parsons' I'll Come Running.

Two days later, the much-loved annual Paramount Summer Classic Film Series kicks off with To Kill a Mockingbird, newly restored as part of Universal's centennial celebration, and Pillow Talk (that one's on our desert-island list). The whole lineup can be perused here. Check out our preview in the May 24 issue, as well as a handy pullout calendar.

Finally, seeing as how the summer heat here can feel biblical – like, plagues of Egypt biblical – the Harry Ransom Center's Biblical Film Series is wickedly apropos. The series starts June 7 with Cecil B. DeMille's 1923 whack at The Ten Commandments.

So yeah, summer's beastly hot, and sometimes you don't want to leave the house, right? Enjoy Steve Collins' You Hurt My Feelings from the luxe plush of your own couch: The festival favorite – and recent New York Times Critics' Pick – starring John Merriman and Courtney Davis is now available on demand from iTunes and Amazon.

Steve Mims is no stranger to awards – his documentary Incendiary: The Willingham Case won the Louis Black Lone Star Award at the 2011 SXSW Film Festival – and his latest, Ruthie Foster: Live at Antone's, won the Blues Foundation Award for Best DVD of 2012 at the annual Memphis-based awards this past weekend.

Last week the Austin Film Society named its new associate artistic director – Holly Herrick, a veteran of film festivals in the Hamptons and Sarasota, as well as an independent film producer. Herrick replaces Bryan Poyser, who left AFS in March to pursue filmmaking full-time. Of Herrick's hire, AFS Executive Director Rebecca Campbell said, “Our search committee saw in Holly a next-generation leader who embraces the role of film in inclusive community dialogue, advocates for programs that bring economic opportunity to artists, and respects the century-plus history of a great art form.” In addition to gaining Herrick at AFS, Austin's independent film scene gets some fresh blood: Herrick's husband is Michael Tully, a filmmaker (Septien) and regular contributor at film site Hammer to Nail. Two for one!

Questions/comments/concerns? Hit us up here: filmflam@austinchronicle.com.